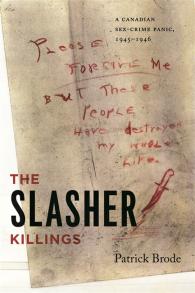 The Slasher Killings is an excellent account of community and police responses to unusual crimes and shows us how crime can sometimes provoke a deeply disproportionate reaction. A fascinating case study—it is also a very good read.”

As the city of Windsor, Ontario, celebrated the end of World War II and the return of its troops with parades and public revelry, the industrial city in the south of Canada was shaken by a series of brutal stabbings. The failure of the police to catch the murderer, a "blood lusting maniac" as the local newspaper described him, the turbulence of the times, and the seemingly random nature of the killings plunged the city into a panic. In The Slasher Killings Patrick Brode tells the dramatic story of the Windsor slasher, the social frenzy that his attacks created, and the surprising results that this hysteria generated.

By July and August of 1945, Windsor residents knew there was a serial killer living among them and that, despite numerous police roundups, no credible suspect had been found. The following summer the panic escalated when the stabbings began again and, this time, focused on "sex deviants" whom the public and police had decided were at the heart of the problem. Brode examines the vicious press campaign that arose out of the paranoia that vilified drifters, the unemployed, racial minorities, and, finally, sexual outsiders, only further fanning the flames of the growing panic. Brode reveals how the authorities used this hysteria to support their efforts to monitor and control the actions of gay men, a campaign that would be part of the process that led to Canada’s 1948 "criminal sexual psychopath" law but would ultimately bring them no closer to the identity of the killer.

The Slasher Killings draws heavily on the records of the murder investigations maintained by the Windsor Police Department, bringing firsthand evidence and documents to light in this dramatic mystery and informative historical study. Local history buffs, true-crime enthusiasts, and readers interested in the role of the media in shaping public discourse will appreciate The Slasher Killings.

The Slasher Killings is an excellent account of community and police responses to unusual crimes and shows us how crime can sometimes provoke a deeply disproportionate reaction. A fascinating case study-it is also a very good read."

– Jim Phillips, professor of law and history at the University of Toronto and editor-in-chief of the Osgoode Society for Canadian Legal History

An intriguing look into gay history-a small-town story of the sort that we don't get enough of, since most books tend to concentrate on the great metropolitan centers.

Brode goes into great detail to show not just the communal effects but also the ways in which these attacks and murders changes (for a moment) the legal process. Sure there are lots of juicy details- creepy letters, threatening notes etched into the wall in the Windsor Tunnel, accounts by the victims and police reports, but we have to keep in mind that Slasher is pieced together with information, not rhythm, in mind. Be patient. Still, traffic accident gawkers should get as much out of this book as case-studying grad students surely will."

A carefully constructed history of a specific criminal panic in a particular city that also speaks to historical issues that affected people and communities across the postwar North America."

Brode has a sensational story to tell, but his delivery is clear and straightforward, devoid of feverish prose. He writes with a cool objective sadly missing from the original overwrought reports about The Slasher."

5 hours 27 min ago
Happy Pub Date! HOUSE AND HOME is a collection of poems that intensely explore the beauty & wisdom to be found in w… https://t.co/MYnkKJxcrx
2 days 7 hours ago
Join WSU President M. Roy Wilson for a book talk next Wednesday! Copies of his memoir will be available for sale a… https://t.co/6q5w5dtFtu
4 days 7 hours ago
TONIGHT! Join @stephanie_heit at @ShopBooksweet for local author's night! https://t.co/pTny5OErDe