Home » Books » Sing This at My Funeral 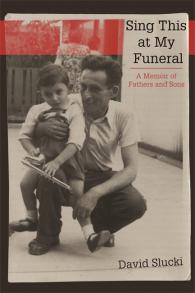 Sing This at My Funeral

A Memoir of Fathers and Sons

In 1978, Jakub Slucki passed away peacefully in his sleep at the age of seventy-seven. A Holocaust survivor whose first wife and two sons had been murdered at the Nazi death camp in Chelmno, Poland, Jakub had lived a turbulent life. Just over thirty-seven years later, his son Charles died of a heart attack. David Slucki’s Sing This at My Funeral: A Memoir of Fathers and Sons tells the story of his father and his grandfather, and the grave legacy that they each passed on to him. This is a story about the Holocaust and its aftermath, about absence and the scars that never heal, and about fathers and sons and what it means to raise young men.

In Sing This at My Funeral, tragedy follows the Slucki family across the globe: from Jakub’s early childhood in Warsaw, where he witnessed the death of his parents during World War I, to the loss of his family at the hands of the Nazis in April 1942 to his remarriage and relocation in Paris, where after years of bereavement he welcomes the birth of his third son before finally settling in Melbourne, Australia in 1950 in an attempt to get as far away from the ravages of war-torn Europe as he could. Charles (Shmulik in Yiddish) was named both after Jakub’s eldest son and his slain grandfather—a burden he carried through his life, which was one otherwise marked by optimism and adventure. The ghosts of these relatives were a constant in the Slucki home, a small cottage that became the lifeblood of a small community of Jewish immigrants from Poland. David Slucki interweaves the stories of these men with his own story, showing how traumatic family histories leave their mark for generations.

Slucki’s memoir blends the scholarly and literary, grounding the story of his grandfather and father in the broader context of the twentieth century. Based on thirty years of letters from Jakub to his brother Mendel, on archival materials, and on interviews with family members, this is a unique story and an innovative approach to writing both history and family narrative. Students, scholars, and general readers of memoirs will enjoy this deeply personal reflection on family and grief.

David Slucki is the Loti Smorgon Associate Professor in Contemporary Jewish Life and Culture at Monash University. He is the author of The International Jewish Labor Bund after 1945: Toward a Global History and co-editor of In the Shadows of Memory: The Holocaust and the Third Generation.

David Slucki's memoir is a gutsy reckoning with ghosts. Like the best stories, Sing This at My Funeral features complex characters and a curious narrator who is not afraid to keep digging. Slucki's voice is compassionate, sharp, and relentless. A page-turning family narrative that is both highly personal and highly relatable.

Sing This at My Funeral is a compelling memoir, crafted with great artistry: an eloquent meditation on fathers and sons, the forces that shape them, and the impact of grief and trauma over the generations. Slucki acts as both subject and witness, intimate participant and historian, skillfully interweaving the past and the present, the personal and the political, and the old world with the new. This riveting quest for understanding is, above all, a profound act of familial love and humanity.

With this exquisitely written history and memoir Slucki has gifted us a haunted and haunting work. This is a vital story of family, loss, grief, and post-war devastation, of connection across time and space, of Jewish worlds and communities made and remade. It is a book unlike any other, a must-read.

– Jordana Silverstein, author of Anxious Histories: Narrating the Holocaust in Jewish Communities at the Beginning of the Twenty-First Century

Brick by loving brick, Slucki builds a lyrical bridge of time, over which ghosts, dybbuks, and specters of memory may come to pass. Sing This at My Funeral is more than a son’s tender tribute to a remarkable man. It is a profound meditation on what it means to father and be fathered.

– Bram Presser, author of the National Jewish Book Award–winning The Book of Dirt

Sing This at My Funeral is a passionate—and visceral—meditation on trauma, memory, loss, and legacy. In urgent yet intimate prose, David Slucki provides a memoir of his beloved late father and grandfather and, using his own life as a fulcrum, explores the impact of their lives and loss on his own identity. Probing wounds still raw after years—or decades, he unflinchingly raises questions that in many cases have no answers. What, he wonders, will his own young son inherit from this family history of Holocaust, immigration, political engagement, and love?

The book is set in motion by David Slucki’s discovery of a trove of Yiddish letters written by his survivor grandfather, Jakub Slucki, whom he had never met. David Slucki found the cache in Los Angeles, the city that, a year earlier, had been the site of his father’s unexpected death. "This is a book about ghosts," writes Slucki in the Preface to Sing This at My Funeral: ghosts of family, the ghosts of the past. But where a straight academic monograph might settle on the term as a handy metaphor, Slucki’s lyrical writing imbues his ghosts with a presence that is rather more profound and complicated. Both in this regard and in the decision to include in the book an unusually large number of family photographs, Sing This at My Funeral shares more in common with genre-busting graphic memoirs like Art Spiegelman’s Maus, Nora Krug’s Belonging, and Michael Kupperman’s All the Answers than with traditional history writing or memoire. Highly recommended for academic, synagogue and school libraries.

Written with raw, candid feeling, this memoir attains its emotional climax not at the description of Sluggo’s sudden death at the age of sixty-seven or even of his funeral, but, rather unexpectedly, in the epilogue, when the author cites his father’s conciliatory email, sent after their most serious !ght (up to that point, their relationship sounded quite idyllic). As French novelist Marcel Proust once said: ‘An artist expresses not only himself, but hundreds of ancestors, the dead who find their spokesman in him.’ David Slucki is one such artist, literally giving voice to his now-voiceless ancestors and to the numerous ghosts that accompany him on his life’s journey.

Lots to think about in this one.

For a book with so much sadness at its center, Sing This at My Funeral is surprisingly wholesome. . . . even the most charmed life is not insulated from the ripples of trauma, and Slucki's memoir had me sobbing more than once. It deftly illustrates the difficulty of healing history’s traumas and the challenge of maintaining that historical connection into the future. Sing This at My Funeral illustrates how personal silences can easily become amplified by communal history, even in the best of times.

This, to me, is the main essence of the book – what we call in Yiddish Di Goldene Keit (the Golden Chain). The passing down, from father and mother to child, all that it is to be Jewish. Beyond religion, beyond nationality, beyond culture. It is what every Jewish parent is faced with, particularly in the post-Holocaust era. The author is clear about this – he’s sub-titled the book A Memoir of Fathers and Sons. And while the project likely started as a therapeutic exercise – his father Charles passed away suddenly less than four years ago – I think it quickly transformed into something more worldly.

– Moshe Goldberg, The Times of Israel

Nostalgia for Yiddish culture is an ideological gesture. Slucki’s memoir [. . .] provides a valuable antidote to the illusions of nostalgia, and for that reason each volume is salubriously and exemplarily political.

David Slucki’s memoir of fathers and sons is simultaneously a still raw highly personal and unfiltered expression of grief at the untimely loss of a ‘larger than life’ father with whom he shared an unusually close bond, and a more capacious reflection on transgenerational Holocaust postmemory.

9 hours 36 min ago
Wayne State University Press is proud to announce our winner and finalists of the 2022 Next Generation Indie Book A… https://t.co/Ozy1WEQY1i
1 day 14 hours ago
Congratulations to all of the winners! https://t.co/Em8m5qoESk https://t.co/0EX9yD1vge
2 days 14 hours ago
RT @muckrack: Today's featured journalist is @fkwang, Communities Correspondent at @NewsHour. Based in Detroit, Frances covers As… https://t.co/XK9qCAOXhS