Home » Books » Shelter from the Holocaust 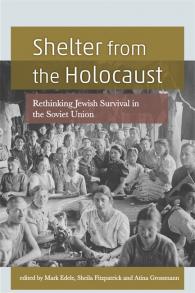 Shelter from the Holocaust

About 1.5 million East European Jews—mostly from Poland, the Ukraine, and Russia—survived the Second World War behind the lines in the unoccupied parts of the Soviet Union. Some of these survivors, following the German invasion of the USSR in 1941, were evacuated as part of an organized effort by the Soviet state, while others became refugees who organized their own escape from the Germans, only to be deported to Siberia and other remote regions under Stalin’s regime. This complicated history of survival from the Holocaust has fallen between the cracks of the established historiographical traditions as neither historians of the Soviet Union nor Holocaust scholars felt responsible for the conservation of this history, which at best is pushed to the margins and often silenced or forgotten altogether. With Shelter from the Holocaust: Rethinking Jewish Survival in the Soviet Union, editors Mark Edele, Sheila Fitzpatrick, and Atina Grossmann have compiled essays that are at the forefront of developing this entirely new field of transnational study, which seeks to integrate scholarship from the areas of the history of the Second World War and the Holocaust, the history of Poland and the Soviet Union, and the study of refugees and displaced persons.

Life as an escapee of the Holocaust was terribly difficult and often lethal, but it at least offered the opportunity for survival and, therefore, an experience fundamentally different than the systematic genocide the Nazis unleashed on those left behind in the territories under their control. What became of these survivors varies greatly—some joined Soviet Jewish evacuees in harsh exile in Central Asia; some Polish Jews evacuated to Iran in 1942 with the exile Anders Army, moving on to Palestine; most were eventually repatriated to postwar Poland, and many of them then fled further to displaced persons camps in allied-occupied Europe, where they constituted the largest group of East European Jewish survivors. Shelter from the Holocaust addresses these very different paths in seven chapters, beginning with a general overview of migration patterns, including a specific example of postwar memory focusing on those who ended up in Australia. The book continues with an exploration of the diverse ways Polish Jewish survivors talk about their experiences and identity with regard to the Holocaust, and ends with one family’s personal narrative of experiences in Uzbekistan during World War II.

Shelter from the Holocaust came to fruition as the result of the opening of formerly classified Soviet and Polish archives, determined efforts to interview the last remaining Holocaust survivors, and the growing interest in the histories of displaced persons and migration. This pioneering volume will interest scholars of eastern European history and Holocaust studies, as well as those with an interest in refugee and migration issues.

Mark Edele is Hansen Chair in History at the University of Melbourne and Australian Research Council Future Fellow. He is the author of Soviet Veterans of World War II, Stalinist Society, and Stalin’s Defectors.

Sheila Fitzpatrick is professor of history at the University of Sydney and Distinguished Service Professor Emerita at the University of Chicago. She has published widely in the history of modern Russia. Her books include On Stalin’s Team: The Years of Living Dangerously in Soviet Politics and A Spy in the Archives: A Memoir of Cold War Russia.

Atina Grossmann is professor of history at Cooper Union. She is the author of Jews, Germans, and Allies: Close Encounters in Occupied Germany and Reforming Sex: The German Movement for Abortion and Birth Control Reform, 1920–1950, and co-author of After the Racial State: Difference and Democracy in Germany and Europe.

Through eight cutting-edge essays, this volume pushes us to rethink Jewish survival strategies during the Holocaust. It brings to light the story of majority of Polish Jewish survivors: their flight, deportation, and evacuation in the Soviet Union. With new numerical data, personal testimonies, and methodological insights, this book expands our understanding of the Jewish experience during the Second World War.

One of the least known facts of the Holocaust is the survival of hundreds of thousands of Jews in the Soviet Union. This excellent volume provides the first systematic treatment of this fascinating chapter of Jewish survival.

– Michael Brenner, author of After the Holocaust: Rebuiliding Jewish Lives in Postwar Germany

Shelter from the Holocaust is an amazing book. It makes significant contributions to several literatures -the Holocaust, but also Soviet history, Polish history, and the history of migration. It consists of seven scholarly essays chock full of new perspectives based on fresh research into painful and important questions, a brilliant introduction, and a moving epilogue. Read, weep, and learn!

– Lewis Siegelbaum, professor of history at Michigan State University and co-author of Broad is My Native Land

This long-awaited volume offers the first in-depth history of over two hundred thousand Polish Jews who escaped, under brutal conditions, the reach of the Final Solution in the Soviet Union. Their experiences as refugees and deportees in the Soviet hinterland are commonly considered peripheral to ‘Holocaust history.’ The authors of this fascinating collection of essays demonstrate however that the harsh and unintended Soviet ‘shelter’ in Siberia and Central Asia saved Polish Jewry from total annihilation.

A landmark work, this volume tackles a crucial history that has received scant attention. Exploring the history of Jewish refugees from the Holocaust who found asylum in the Soviet Union through many lenses, this collection offers wholly original perspectives and opens new realms of research.

– Debórah Dwork, Rose Professor of Holocaust History at Clark University and author of Flight from the Reich

This book brings to light the mostly forgotten story of Polish Jewish Holocaust survivors who found shelter from the Holocaust in the Soviet hinterland. This is a new aspect of Holocaust history that is very important for our understanding of the problems and dilemmas Holocaust survivors faced.

This volume deserves to be appreciated for bringing to light untold stories of Holocaust survivors and East European Jews in general. It is also significant that this book allows the reader to better comprehend the scope of the Holocaust and the facts of the ‘Soviet shelter’, and the background to the founding of the State of Israel in the
postwar period.

This highly engaging book opens up as many, if not more questions than it answers. It delineates a new sub-field in the history of the Holocaust and in other fields besides, and makes for exciting and fresh reading.

Collectively, the contributions to Shelter from the Holocaust reframe the debates about the meaning of "Holocaust survival"; show the profound impact of Polish-Jewish displacement on domestic wartime and postwar Polish and Soviet societies; and, most importantly, draw narratives of Polish Jewish refuge in the Soviet Union from the margins of established historiographies into the center of a new field of transnational Eurasian migration and diaspora studies.

This fine collective work will stimulate work on still neglected subjects such as the relations between the Ashkenazi migrants and autochthonous Central Asian Jews, cultural life along the migrants, and their experiences of return after 1944.

1 day 6 hours ago
In THE ENCHANTED BOOT, Nancy L. Canepa encourages a revisitation of the fairy-tale canon with this fascinating anth… https://t.co/qzfMsEAyvv
2 days 7 hours ago
FEARLESS VULGARITY by Ken Feil discusses "Valley of the Dolls" author Jacqueline Susann’s camp comedy and legacy.… https://t.co/XLUcIGCyWD
2 days 8 hours ago
RT @WSUHumClinic: Stay informed on what's new and next from the @WSUPress... Nothing Special by Desiree Cooper (available this Oct.)… https://t.co/0zNnngDSS1