Home » Books » The Shaping of Jewish Identity in Nineteenth–Century France 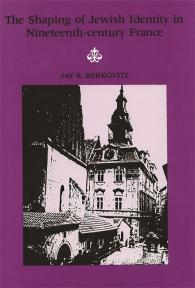 The Shaping of Jewish Identity in Nineteenth–Century France

Nineteenth-century French Jewry was a community struggling to meet the challenges of emancipation and modernity. This struggle, with its origins in the founding of the French nation, constitutes the core of modern Jewish identity. With the Revolution of 1789 came the collapse of the social, political, and philosophical foundations of exclusiveness, forcing French society and the Jews to come to terms with the meaning of emancipation. Over time, the enormous challenge that emancipation posed for traditional Jewish beliefs became evident. In the 1830s, a more comprehensive ideology of regeneration emerged through the efforts of younger Jewish scholars and intellectuals. A response to the social and religious implications of emancipation, it was characterized by the demand for the elimination of rituals that violated the French conceptions of civilization and social integration; a drive for greater administrative centralization; and the quest for inter-communal and ethnic unity. In its various elements, regeneration formed a distinct ideology of emancipation that was designed to mediate Jewish interaction with French
society and culture.

Jay Berkovitz reveals the complexities inherent in the processes of emancipation and modernization, focusing on the efforts of French Jewish leaders to come to terms with the social and religious implications of modernity. All in all, his emphasis on the intellectual history of French Jewry provides a new perspective on a significant chapter of Jewish history.

Jay R. Berkovitz is an associate professor in the department of Judaic and Near Eastern Studies at the University of Massachusetts at Amherst. He received his Ph.D. from Brandeis University.

4 hours 42 min ago
Happy Pub Date! HOUSE AND HOME is a collection of poems that intensely explore the beauty & wisdom to be found in w… https://t.co/MYnkKJxcrx
2 days 6 hours ago
Join WSU President M. Roy Wilson for a book talk next Wednesday! Copies of his memoir will be available for sale a… https://t.co/6q5w5dtFtu
4 days 6 hours ago
TONIGHT! Join @stephanie_heit at @ShopBooksweet for local author's night! https://t.co/pTny5OErDe