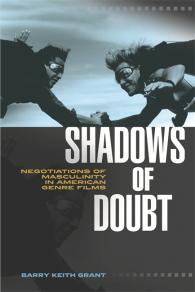 In Shadows of Doubt, Barry Keith Grant moves through virtually the entire history of American cinema, from the silents to the new millennium.”

In Shadows of Doubt: Negotiations of Masculinity in American Genre Films, Barry Keith Grant questions the idea that Hollywood movies reflect moments of crisis in the dominant image of masculinity. Arguing instead that part of the mythic function of genre movies is to offer audiences an ongoing dialogue on issues of gender, Grant explores a wide range of genre films, including comedies, musicals, horror, science fiction, westerns, teen movies, and action films.

In ten chapters arranged chronologically according to the films discussed, Grant provides a series of close analyses of such disparate films such as Broken Blossoms, The Fatal Glass of Beer, Red River, 2001: A Space Odyssey, Night of the Living Dead, and The Hurt Locker to demonstrate that representations of masculinity in the movies involve a continuous process of ideological testing and negotiation. While some of the films considered offer important challenges to dominant representations of masculinity, others reveal an acceptance or capitulation to them.

Always attentive to the details of individual film texts, Grant also places the genre films he discusses within their historical contexts and the broader contexts and traditions of popular culture that inform them, including literature, theater, and music. Scholars of film and television studies as well as readers interested in gender studies will appreciate Shadows of Doubt.

Barry Keith Grant is a professor in the Department of Communications, Popular Culture, and Film at Brock University in Ontario, Canada. He is the author or editor of many books, including Film Genre: From Iconography to Ideology, 100 Documentary Films (with Jim Hillier) and Documenting the Documentary: Close Readings of Documentary Film and Video (Wayne State University Press, 1998) and has served as editor-in-chief of the four-volume Schirmer Encyclopedia of Film.

Despite the current interest in masculinity in film studies, there have been surprisingly few books published on the subject. Barry Keith Grant's Shadows of Doubt is a welcome-if not long overdue-contribution to both genre and masculinity studies in film."

In Shadows of Doubt, Barry Keith Grant moves through virtually the entire history of American cinema, from the silents to the new millennium. His knowledge is encyclopedic without being pedantic and he moves sure-footedly through other terrains of the popular culture landscape, especially music. In ranging so widely, Grant demonstrates both the ubiquity of masculinist ideals in American cinema and some key texts that challenge these notions within mainstream genre forms."

– David Desser, professor of cinema studies at the University of Illinois at Urbana-Champaign

Grant's Shadows of Doubt is a collection of two decades of the author's work on Hollywood masculinity and popular genre. With individual case studies broadly corresponding to a century of Hollywood representation, Shadows of Doubt is a sweeping overview of the relationship between gender, American culture, and film genre from the birth of classical cinema to present day.

The clear strength of this book is Grant's all-encompassing knowledge of film history and theory, which allows him to deal with a wide-ranging group of films and apply his theory and expertise in determining how the films approach masculinity…And he uses theory in a surprisingly approachable way…Summing up: highly recommended."