Home » Books » In the Shadow of Detroit 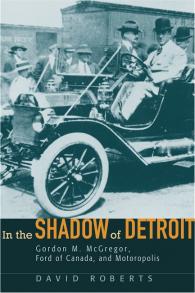 In the Shadow of Detroit

David Roberts has produced a meticulously detailed account of one of the most significant industrial phenomena to occur in Canadian history. Finally, there is a solid work on the industry that propelled Canadians into the 20th Century.

Part biography and part corporate history, In the Shadow of Detroit investigates the life and career of Gordon M. McGregor, who founded and led Ford of Canada during the first two decades of the twentieth century. With no automotive background, minimal technical expertise, and only a few years of experience in business, McGregor came to Ford in 1904 from a failing wagon-building firm. David Roberts draws from diverse public and private historical sources to chronicle McGregor's swift ascension to corporate leader, including how McGregor attached himself to Henry Ford's meteoric rise, achieved remarkable success, and became for a time Windsor's preeminent industrialist and civic leader.

Roberts intertwines McGregor's corporate, civic, and personal lives to trace his pioneering role in the automobile industry. Some themes from McGregor's career that are considered here include company growth, the technical and cultural concept of the automobile, the impact of automotive transportation, technological reliance on Detroit, parent-branch relations, the effects of border proximity, industrial and political lobbying, labor relations, secondary manufacturing, public involvement, and the Great War. In addition, Roberts probes McGregor's often-subservient relationship with the enigmatic Henry Ford and examines how McGregor drew praise and political ire in calling for regional governance in the "Border Cities" opposite Detroit. In the years before his premature death, McGregor and his company dominated and defined the growing automotive industry in Windsor-Detroit, and their story deserves to be more widely known.

Both elegantly written and exhaustively researched, In the Shadow of Detroit will be enjoyable and informative reading for local historians and anyone interested in the automobile industry.

David Roberts is an editor with the Dictionary of Canadian Biography/Dictionnaire biographique du Canada at the University of Toronto.

Automotive historians have long treated the Ford Motor Company of Canada as a historical footnote. David Roberts has brought Gordon McGregor and the Canadian Ford Company out of the shadow to stand proudly alongside the parent company."

As a regional history, this is a masterful study of the relationship between American industrialists and the Canadians who emulate them. David Roberts has produced a meticulously detailed account of one of the most significant industrial phenomena to occur in Canadian history. Finally, there is a solid work on the industry that propelled Canadians into the 20th Century."

David Roberts has made a significant contribution to the study of Canadian and international automotive history, which has been long neglected. His study of Gordon M. McGregor and Ford Canada focuses upon the social influence of the automobile in Canada and throughout the world, as well as on the manufacturer's influence upon the physical environment of the greater Windsor community and the relationship with the Canadian labour movement.

If you are interested in learning about the birth of Ford Canada, plus the life and times of one of our early industrialists, In the Shadow of Detroit is a great read."

This previously untold chapter in Ford's history has much to interest automotive historians, as well as blue oval enthusiasts."

This is an important book, covering a key period in the transformation of southwestern Ontario. It is well written, carefully researched, and a model of documentation."

This is not merely another book about Ford's Model T. It is a wide-ranging volume that covers product, shows the changes that we made as a society as we learned to live with the automobile and most importantly, the contributions that the Ford Motor Company of Canada, limited made to public life during Gordon McGregor's time at the corporate wheel."

David Robert's book is not the usual biography of a rages to riches industrialist. Roberts ably weaves together McGregor's personal, corporate, and civic lives to create a vivid portrait of the man and his place within the modernizing yet still rough-and-tumble Windsor-Detroit area and the rapidly expanding Ford empire. This book is different because Roberts did not just write a biography: he wrote the story of a distinctive transborder region. Roberts has vividly shown that McGregor was a capable centurion in Ford's fascinating Motoropolis."

This book, well researched and well written, details the life of McGregor, founder of Ford of Canada. It provides a refreshing look at an industry that has been so American dominated that it has overlooked leaders like McGregor and McLaughin, who created a successful industry in Canada."