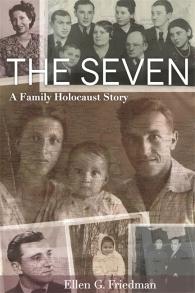 The Seven, A Family Holocaust Story

Most Polish Jews who survived the Second World War did not go to concentration camps, but were banished by Stalin to the remote prison settlements and Gulags of the Soviet Union. Less than ten percent of Polish Jews came out of the war alive—the largest population of Jews who endured—for whom Soviet exile was the main chance for survival. Ellen G. Friedman’s The Seven, A Family Holocaust Story is an account of this displacement.

Friedman always knew that she was born to Polish-Jewish parents on the run from Hitler, but her family did not describe themselves as Holocaust survivors since that label seemed only to apply only to those who came out of the concentration camps with numbers tattooed on their arms. The title of the book comes from the closeness that set seven individuals apart from the hundreds of thousands of other refugees in the Gulags of the USSR. The Seven—a name given to them by their fellow refugees—were Polish Jews from Warsaw, most of them related. The Seven, A Family Holocaust Story brings together the very different perspectives of the survivors and others who came to be linked to them, providing a glimpse into the repercussions of the Holocaust in one extended family who survived because they were loyal to one another, lucky, and endlessly enterprising. Interwoven into the survivors’ accounts of their experiences before, during, and after the war are their own and the author’s reflections on the themes of exile, memory, love, and resentment.

Based on primary interviews and told in a blending of past and present experiences, Friedman gives a new voice to Holocaust memory—one that is sure to resonate with today’s exiles and refugees. Those with an interest in World War II memoir and genocide studies will welcome this unique perspective.

The daughter of Holocaust survivors, Ellen G. Friedman was born in Kyrgyzstan, a republic of the Soviet Union. She is professor of English and founding director of Holocaust and genocide studies at the College of New Jersey, and is on the Faculty Advisor’s Council for the Fortunoff Video Archive for Holocaust Testimonies at Yale University. Her books include Joyce Carol Oates, Breaking the Sequence: Women’s Experimental Fiction, Morality USA, and Joan Didion: Essays and Conversations.

Combining careful research, personal courage, and a novelist’s sense of detail, Ellen Friedman's family history restores a sense of colorful humanity to years that we recall in ash gray, while at the same time providing us with a serious portrayal of the motives and reasons of those who fled and those who did not, and what survival meant for a family one, two, and three generations down the line. No book in English provides such a careful rendering of the experience of Jews who fled or were deported east to the Soviet Union, people who were after all the largest group of Jews from Poland to survive the Holocaust.

A fascinating account of a story about what happened to the Polish Jews who did not perish in Nazi camps, but survived in the Russian Gulags and in the distant provinces. It brings to life a personal account that reflects my own family history. It is beautifully written, gripping, and should be read by all those interested in the history of the twentieth century.

Using oral histories conducted with the main protagonists, the author skillfully guides the reader through the journeys that each of the main characters took during the war years and through to their lives in the United States after World War II. This is an important volume at a time when the task of collecting the stories of survivors has become increasingly urgent.

– David Slucki, author of The International Jewish Labor Bund after 1945: Toward a Global History

Among memoirs of the Holocaust, Ellen Friedman’s The Seven, A Family Holocaust Story is distinguished by its unusually vivid, emotionally engaging, sharply observed prose. It is a pleasure to read even when what we are reading is harrowing and deeply disturbing, a tribute to the integrity of the author bearing witness to her remarkably courageous, brilliantly portrayed relatives. Indeed, here is a ‘family’ story that is both painfully specific and universal.