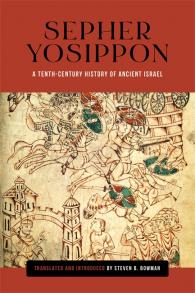 A Tenth-Century History of Ancient Israel

Translated and Introduced by Steven B. Bowman

Sepher Yosippon was written in Hebrew by a medieval historian noted by modern scholars for its eloquent style. This is the first known chronicle of Jewish history and legend from Adam to the destruction of the Second Temple, this is the first known text since the canonical histories written by Flavius Josephus in Greek and later translated by Christian scholars into Latin.

Sepher Yosippon has been cited and referred to by scholars, poets, and authors as the authentic source for ancient Israel for over a millennium, until overshadowed by the twentieth-century Hebrew translations of Josephus. It is based on Pseudo Hegesippus’s fourth-century anti-Jewish summary of Josephus’s Jewish War. However, the anonymous author [a.k.a. Joseph ben Gurion Hacohen] also consulted with the Latin versions of Josephus’s works available to him. At the same time, he included a wealth of Second Temple literature as well as Roman and Christian sources. This book contains Steven Bowman’s translation of the complete text of David Flusser’s standard Hebrew edition of Sepher Yosippon, which includes the later medieval interpolations referring to Jesus. The present English edition also contains the translator’s introduction as well as a preface by the fifteenth-century publisher of the book.

The anonymous author of this text remains unique for his approach to history, his use of sources, and his almost secular attitude, which challenges the modern picture of medieval Jews living in a religious age. In his influential novel, A Guest for the Night, the Nobel Laureate author Shmuel Yosef Agnon emphasized the importance of Sepher Yosippon as a valuable reading to understand human nature. Bowman’s translation of Flusser’s notes, as well as his own scholarship, offers a well-wrought story for scholars and students interested in Jewish legend and history in the medieval period, Jewish studies, medieval literature, and folklore studies.

Steven B. Bowman is emeritus professor of Judaic studies at the University of Cincinnati. He is author of The Jews of Byzantium 1204–1453, Jewish Resistance in Wartime Greece, and The Agony of Greek Jewry 1941–1945, and has edited and published a series of Holocaust memoirs.

Bowman's work is a wonderful achievement of producing an English version of David Flusser's pioneering critical edition of the medieval anonymous Sepher Yosippon, merged with new breathtaking notes. This is an absolutely innovative and challenging accomplishment of a great connoisseur of medieval Hebrew Literature.

Sepher Yosippon is the major Hebrew source for Jewish Second Temple history. The translation by Steven Bowman enables everybody interested to delve into this highly important work that shaped Jewish self-understanding from the Middle Ages until the modern time.

The book known as Sepher Yosippon is probably the very first book written in Hebrew on the continent of Europe, and it soon became one of the most popular and widely read Hebrew books. Surprisingly, it has never before been made available to English readers. Steven Bowman has done a great service to the wider public, as well as to students interested in Jewish history and literature, by producing this fluent and readable translation.

Steven Bowman has given us a readable and erudite annotated translation of the tenth-century Hebrew classic, Sepher Yosippon. Popular among Jews all over the world into the nineteenth century, Sepher Yosippon relates a consecutive narrative of Jewish history in the Persian and Greco-Roman periods, especially the Great Jewish Revolt against Rome. Bowman traces the variety of classical and early medieval sources; versions of the first-century Jewish historian, Josephus Flavius, and the Latin Apocrypha; and the ambiance of Byzantine Southern Italy, where this pseudonymous work was composed. It is a welcome contribution to our knowledge of this foundational text of Jewish historiography.