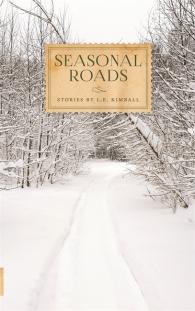 "Inscrutable, inaccessible, indefinable. Even at the end. That’s what her mother had always been to her." In Seasonal Roads, L. E. Kimball introduces Norna, Aissa, and Jane—mother, daughter, and granddaughter—who are as fierce and complex as the northern terrain they inhabit. Following a nonlinear timeline, Kimball’s stories unravel the beautiful mess of layers that is their lives and allow the narratives to roam freely in time, thus granting the reader keen insights into the past, present, and future.

Spiraling through time and perspective, the stories converge at Norna’s two-room cabin in the woods, accessible only by "seasonal roads" that disappear under deep snow in the winter. The cabin is witness to Norna’s years of solitude spent hunting, foraging, fishing, and defending herself from intruders, Aissa’s escape from her divorce, and Jane’s stubborn vigil as a forest fire rages dangerously nearby. Through raw and ephemeral memories, we learn the darkest kept secrets of these women and the ties that bind them to each other and to the land.

Kimball’s sensual descriptions of the Upper Peninsula, combined with her hauntingly vivid characters, paint an unforgettable picture in Seasonal Roads. Readers of fiction will enjoy the surprising turns of this collection.

L.E. Kimball is an assistant contingent professor in the English department at Northern Michigan University, as well as an associate editor for Passages North literary journal. She is also the author of A Good High Place and has been published in journals such as Alaska Quarterly Review and Gray’s Sporting Journal. Most of the year she lives off the grid on a trout stream with her son, Josh, and her English shepherd, Maggie.

L. E. Kimball's Seasonal Roads performs the magic of translating from the place itself—Michigan's Upper Peninsula—stories that are equal parts bite and beauty, boldness and heartbreak, maelstrom and miracle. And such compassion for her characters, and for this far northern landscape. And I mean in every single sentence!

– Jack Driscoll, author of The World of a Few Minutes Ago (Wayne State University Press, 2012)

In her hypnotic new linked story collection, L. E. Kimball brilliantly reintroduces to pastoralism its endemic menace and ability to trouble our hearts, allowing the aggressiveness, the desire to suffocate, the violence lurking within all thin bucolia to trickle from between its seams, made—in these carefully crafted pieces—finally, ecstatically, uncontainable.

– Matthew Gavin Frank, author of The Mad Feast and Preparing the Ghost

Kimball begins Seasonal Roads with an epigraph by Einstein about the arbitrary nature of time, and then proceeds to bear this out in the fourteen linked stories which make up this memorable collection. Presenting the lives of three generations of strong, willful women living in the remote and austere environment of Michigan’s Upper Peninsula, Kimball shows that the distinctions we use to make order of the world are problematic and that human lives are connected—both to each other and to the natural world—in ways both mysterious and profound. Moving backward and forward through a hundred-year period, and punctuating her accounts with a natural imagery that is beautiful in its stark realism, these engaging stories will not be easily forgotten.

– Donald Lystra, author and two-time winner of the Michigan Notable Book Award and Midwest Book Award for Season of Water and Ice and Something That Feels Like Truth

In Seasonal Roads we find again Hemingway’s rivers, Harrison’s feasts, Campbell’s competent and independent women survivors – along with something else that is pure Kimball, something elusive, delicate, and poetic, and at the same time savage and strong.

Seasonal Roads, a novel in stories, examines the lives of three women, representing three generations of a family that resides in Michigan’s Upper Peninsula. L. E. Kimball employs a nonlinear approach to each story, allowing her narrative to roam freely in time, thus granting the reader keen insights into the past, present, and future—and in some instances the stories shift into a speculative mode, which explores what might have been or might yet come into being. Seasonal Roads is an abundant, lyrical, and sensual depiction of life in Michigan’s natural domain.

The three strong women in these generational stories pass on to one another the secrets of surviving in the rugged country of Michigan's Upper Peninsula. The brutality and death that mark nature is never glossed over, but Kimball knows that however unrelenting nature can be, alienation from the land is the greatest peril of all.

L. E. Kimball’s Seasonal Roads leads readers on paths through time and space like no map could. Her story of the lives of three generations of women both meanders around and beelines toward big truths.

This is Hemingway country, inhabited by women. . . .Kimball’s women are as courageous and conflicted as Hemingway’s men. But the women’s bravery involves less braggadocio.

Kimball understands the power of place.

11 hours 41 min ago
RT @DarkProjections: Celebrating #Kolchak release day with an appearance on @richardsyrett’s Strange Planet. We talk all things NIGHT ST… https://t.co/96VJZhpsti
16 hours 10 min ago
RT @zoebossiere: So thrilled to announce a new anthology, THE LYRIC ESSAY AS RESISTANCE: TRUTH FROM THE MARGINS, w/ @ericatrabold av… https://t.co/LixsspYdKb
1 day 9 hours ago
Today marks the 4th anniversary of the passing of the Queen of Soul, Aretha Franklin. In THE QUEEN NEXT DOOR, phot… https://t.co/DbwToz8ff4