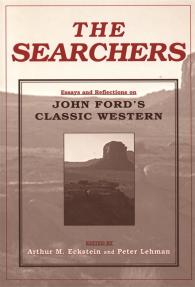 The unique appeal of The Searchers lies in its essential irrationality, its mystery, its refusal of conventional narrative logic.

In many ways a traditional western, The Searchers (1956) is considered by critics as one of the greatest Hollywood films, made by the most influential of western directors. But John Ford’s classic work, in its complexity and ambiguity, was a product of post-World War II American culture and sparked the deconstruction of the western film myth by looking unblinkingly at white racism and violence and suggesting its social and psychological origins. The Searchers tells the story of the kidnapping of the niece of Ethan Edwards (John Wayne) by Comanche Indians, and his long search to find her—ultimately not to rescue her but to kill her, since he finds her racially and sexually violated.

The Searchers: Essays and Reflections on John Ford’s Classic Western brings historians and film scholars together to cover the major critical issues of this film as seen through a contemporary prism. The book also contains the first published, sustained reaction to the film by Native Americans. The essays explore a wide range of topics: from John Wayne’s grim character of Ethan Edwards, to the actual history of Indian captivity on the southern Plains, as well as the role of the film’s music, setting, and mythic structure—all of which help the reader to understand what makes The Searchers such an enduring work.

Arthur M. Eckstein is professor of History at University of Maryland.

Peter Lehman is Director of the Interdisciplinary Humanities Program at Arizona State University. He is author of Roy Orbison: The Invention of an
Alternative Rock Masculinity and editor of Masculinity: Bodies, Movies, Culture.

The Searchers: Essays and Reflections on John Ford's Classic Western goes beyond auteur issues with striking formulations of the historical, social, and even geographical context surrounding the film. . . . The result is the best kind of auteur and genre criticism, deepening our appreciation of a film classic, providing new information on its production, [and] intelligent treatment of its thematic richness and connection to American history and culture."

A richer, highly ambitious book is the collection of essays on The Searchers edited by Arthur M. Echstein and Peter Lehman. The quality of the writing in this book is consistently high, and each contributor approaches his/her essay with an in-depth knowledge of The Searchers. This collection offers a series of comprehensive, accessible and authoritative essays on a film that will continue to intrigue and enthrall us for the foreseeable future. It won't be the last-ever word on The Searchers; but as an anthology of disparate interpretations, it deserves to be the definitive one."

The unique appeal of The Searchers lies in its essential irrationality, its mystery, its refusal of conventional narrative logic. Nowhere is this clearer than in the responses to the film found in an engaging new anthology of essentially adulatory essays on the film edited by Arthur Eckstein and Peter Lehman."