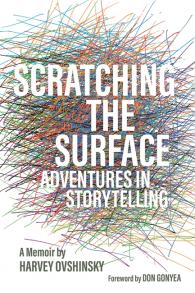 A Memoir by Harvey Ovshinsky
Foreword by Don Gonyea

Scratching the Surface: Adventures in Storytelling is a deeply personal and intimate memoir told through the lens of Harvey Ovshinsky’s lifetime of adventures as an urban enthusiast. He was only seventeen when he started The Fifth Estate, one of the country’s oldest underground newspapers. Five years later, he became one of the country’s youngest news directors in commercial radio at WABX-FM, Detroit’s notorious progressive rock station. Both jobs placed Ovshinsky directly in the bullseye of the nation’s tumultuous counterculture of the 1960s and 70s. When he became a documentary director, Ovshinsky’s dispatches from his hometown were awarded broadcasting’s highest honors, including a national Emmy, a Peabody, and the American Film Institute’s Robert M. Bennett Award for Excellence.

But this memoir is more than a boastful trip down memory lane. It also doubles as a survival guide and an instruction manual that speaks not only to the nature of and need for storytelling but also and equally important, the pivotal role the twin powers of endurance and resilience play in the creative process. You don’t have to be a writer, an artist, or even especially creative to take the plunge, Ovshinsky reminds his readers. "You just have to feel strongly about something or have something you need to get off your chest. And then find the courage to scratch your own surface and share your good stuff with others."

Above all, Ovshinsky is an educator, known for his passionate support of and commitment to mentoring the next generation of urban storytellers. When he wasn’t teaching screenwriting and documentary production in his popular workshops and support groups, he taught undergraduate and graduate students at Detroit’s College for Creative Studies, Wayne State University, Madonna University, and Washtenaw Community College. "The thing about Harvey," a colleague recalls in Scratching the Surface, "is that he treats his students like professionals and not like newbies at all. His approach is to, in a very supportive and non-threatening way, combine both introductory and advanced storytelling in one fell swoop."

Harvey is a master storyteller with a passion for creating inspiring films and television programs. He’s driven by his love of helping others tell their own stories, so if you have one to tell, Scratching the Surface is an invaluable resource and a great guide to unleashing your own creativity.

– Bill Pace, television and feature film producer on A League of Their Own; HBO’s A Private Matter; PBS’s LateNight America; and movies for CBS, ABC, NBC, and Hallmark Hall of Fame

Utilizing his unique ability to depict life experiences in a way that captivates and informs, Harvey brings his own human adventure into focus when conveying the important role that storytelling plays in our society.

A thoughtful exploration into the life of a passionate storyteller. From the moment I met Harvey, I felt his unmatched enthusiasm to share stories and inspire greatness. Scratching the Surface is a must read for anyone interested in the art of sharing stories.

– Scott Bogoniewski, former chair of entertainment arts at College for Creative Studies and technical director in the entertainment industry

Leave it to Harvey Ovshinsky to create a new genre, the biotext, where memoir meets textbook. With its mix of life struggles, creative escapades, and production war stories, Scratching the Surface reads like a fireside chat with a storytelling sage. I’ll be keeping this trove of inspiration and concrete advice on my writing desk for years to come.

I love the journey in this book. Whether it’s in Harvey’s documentaries, screenplays, or his own backstory, Scratching the Surface reminds us what it takes to make our work ‘stronger, tighter, deeper.’ And it’s about so much more that makes this book such a wonderful read. It’s about not being afraid to go past our own boundaries to be creative and fresh and innovative.

In this master class for filmmakers and journalists, Mr. O (as his former students call him) slyly teaches storytelling through the action of showing, instead of telling. His light touch allows for deep dives with a killer sense of humor, personal vulnerability, and profound poetry. I have a renewed understanding of my beloved city’s roots, gained a unique insight into story crafting, and am inspired to reimagine my next film project by scratching its surface.

– Lara Sfire, filmmaker and co-owner/founder/executive director of the Film Lab

Storytelling man of multiple media Harvey Ovshinsky says the good stuff in a story is beneath the surface, and we get
an enlightening deep dive in this book. As he shares his very personal story, he equally reveals societal change especially n Detroit and generally for America as well.

I recently came across a line by the epigrammatically clever writer Henry Oliver, who devised what he calls "The Fitzgerald Rule" (after the British novelist Penelope Fitzgerald): "You spot talent by looking at what people persist at, not what persistently happens to them." By that measure, Harvey Ovshinsky—a Detroit-born-and-raised writer and creator who has thrived in a variety of mediums—is talented indeed.

Live moderated discussion and Q+A via Ferndale Public Library (May 19, 2021)

Interview on Ann Arbor District Library's Under Covers podcast (May 11, 2021)