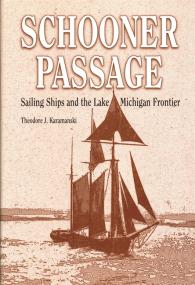 Schooner Passage is a broad and comprehensive examination of the schooner's role on Lake Michigan throughout the nineteenth and into the early twentieth century....

Throughout the nineteenth and early twentieth centuries, schooner trade was a well-developed system of maritime transport for commodities such as grain, lumber, and iron. The schooner trade was as critical to the development of the Great Lakes region as covered wagons were to the Far West and paddle wheel steamers were to the South.
Schooners sailed the Great Lakes in large
numbers and played a formative role in the
shaping of pioneer life throughout the region. The schooners that traveled the Lake Michigan basin succeeded in bringing a range of shoreline communities and four separate states into one coherent region. Although schooners successfully competed with steam vessels for more than a half-century, wooden sailing ships could not match the scale of the giant steel bulk carriers that began to emerge from shipyards in the twentieth century. The Mary A. Gregory—one of the last schooners left—was torched, sunk, and buried in Lake
Michigan in 1926. Schooner Passage is a
history of these magnificent sailing vessels
and their role in maritime trade along Lake
Michigan.

Theodore J. Karamanski shares with the reader the stories of the men and women who sailed on the schooners, their labor issues and strikes, the role of the schooner in the maritime economy along the Lake Michigan basin, and the factors that led to the eventual demise of that economy in the early twentieth century. Karamanski has put together historical accounts from newspaper clippings, historical society archives, and government documents to provide one of the few available histories of schooners.

Schooner Passage will interest scholars and students of Great Lakes and American history as well as the general reader interested in nineteenth-century western expansion.

Theodore Karamanski is Associate Professor of History at Loyola University of Chicago.

Schooner Passage is the best work on this subject published to date. [Karamanski] does a fine job of weaving together personal recollections of Great Lakes mariners with contemporary history. Excellent original illustrations and a number of previously unpublished photographs help us to begin to understand life on the lakes. This book belongs on the bookshelf of anyone who is interested in the Great Lakes.

Schooner Passage is a broad and comprehensive examination of the schooner's role on Lake Michigan throughout the nineteenth and into the early twentieth century.... [Karamanski] demonstrates a masterful command of sources using manuscripts, secondary sources, and even archaeological evidence to weave a fascinating tale of social and technological history.