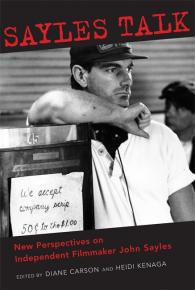 His name is synonymous with "independent film," and for more than twenty-five years, filmmaker John Sayles has tackled issues ranging from race and sexuality to the abuses of capitalism and American culture, aspiring to a type of realism that Hollywood can rarely portray. This collection offers unprecedented coverage of Sayles’s craft and content, as it deploys a rich variety of critical methods to explore the full scope of his work. Together the essays afford a deeper understanding not only of the individual films—including his 1980 The Return of the Secaucus Seven (named to the National Registry) and the recent Limbo and Men with Guns—but also of Sayles’s unusual place in American cinema and his influence worldwide.

The focus of Sayles’s films is frequently on peoples’ lives, not on stories with tidy endings, and often a main goal is to alert viewers of their complicity in the problems at hand. One might assume his style to be content driven, but closer inspection reveals a mix of styles from documentary to postmodern. In this anthology, a set of international scholars addresses these and many other aspects of Sayles’s filmmaking as they explore individual works. Their methodological approaches include historical and industry analysis as well as psychoanalysis and postcolonial theory, to name a few.

Sayles Talk is both an in-depth and wide-ranging tribute to the "father" of independent film. In one volume, readers can find discussions of most of Sayles’s films together with a comprehensive introduction to his film practice, an annotated list of existing literature on Sayles, and information on resources for further inquiry into his fiction, film, and television work. Film students as well as seasoned critics will turn to this book time and again to enrich their understanding of one of America’s great cinematic innovators and his legacy.

Diane Carson is professor of film studies at St. Louis Community College at Meramec. Among other books, she is editor of John Sayles: Interviews (University Press of Mississippi, 1999) and co-editor of More Than a Method: Trends and Traditions in Contemporary Film Performance (Wayne State University Press, 2004).

Heidi Kenaga is adjunct assistant professor in the Department of Communication at the University of Memphis.

The variety of essays in Sayles Talk ably fills a long-standing need in film literature for a sound critical introduction to the values and working methods of one of America's most respected and successful independent filmmakers.

Sayles Talk pays tribute to an American master with far-ranging concerns. These dozen essays highlight the extent of John Sayles's engagement and innovation and cast new--and welcome--light on his film style. An engaging and timely volume showcasing twenty-five years of independent film.

– Chris Holmlund, chair of the Cinema Studies Program, University of Tennessee, author of Impossible Bodies: Femininity and Masculinity at the Movies

Sayles Talk makes an eloquent and thorough case for seeing John Sayles as a major American filmmaker, though one more akin to Ford or Welles than to Stone or Tarantino. Because his films explore various classical cinematic genres with a politically aware if wary camera, at once socially realistic yet aesthetically self-aware, Sayles complicates many of the binaries that organize much contemporary film criticism: mainstream versus independent, transparent versus self-conscious, modern versus postmodern. In the sustained 'hybridity' and intelligence of his filmmaking, Sayles has created a cinematic legacy that will continue to inspire, as the essays in Sayles Talk convincingly attest.