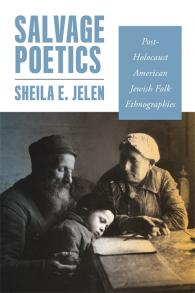 S. Ansky’s ethnographic expedition (1912–1914) and Martin Buber’s adaptation and compilation of Hasidic tales (1906–1935) are presented as a means of contextualizing the role of an ethnographic consciousness in modern Jewish experience and the way in which literary adaptations and mediations create opportunities for the creation of folk ethnographic hybrid texts. Salvage Poetics looks at classical texts of the American Jewish experience in the second half of the twentieth century, such as Maurice Samuel’s The World of Sholem Aleichem (1944), Abraham Joshua Heschel’s The Earth Is the Lord’s (1950), Elizabeth Herzog and Mark Zborowski’s Life Is with People (1952), Lucy Dawidowicz’s The Golden Tradition (1967), and Roman Vishniac’s A Vanished World (1983), alongside other texts that consider the symbiotic relationship between pre-Holocaust aesthetic artifacts and their postwar reframings and reconsiderations.

Salvage Poetics is particularly attentive to how literary scholars deploy the notion of "ethnography" in their readings of literature in languages and/or cultures that are considered "dead" or "dying" and how their definition of an "ethnographic" literary text speaks to and enhance the scientific discipline of ethnography. This book makes a fresh contribution to the fields of American Jewish cultural and literary studies and art history.

Sheila E. Jelen is associate professor of Hebrew and Jewish studies in the Department of Modern and Classical Languages, Literatures, and Cultures at the University of Kentucky, Lexington. She is the author of Intimations of Difference: Dvora Baron in the Modern Hebrew Renaissance and co-editor of Modern Jewish Literatures: Intersections and Boundaries and Reconstructing the Old Country: American Jewry in the Post-Holocaust Decades (Wayne State University Press, 2017).

In a series of brilliant readings of the works of photography, ethnography, and anthropology that emerged from the devastations of the Holocaust and the deracination of assimilation, Sheila Jelen uncovers the ‘salvage poetics’ that mobilized Jewish cultural fragments against the ruins. Salvage Poetics thus sheds light on both the past and present and how the two are entwined through a Jewish poetics of salvage as well as loss.

– Naomi Seidman, author of The Marriage Plot, Or, How Jews Fell in Love with Love, and with Literature

The absence felt noticeable because this stimulating and impressive book has an impact— and deserves to have a readership—far beyond its topic. While Salvage Poetics will primarily and valuably be of use for scholars examining the reconstruction of Jewish cultural life and identity after the Holocaust, it has much to say to folklorists more generally considering the interactive incorporation and adaptive use of literary material in the ongoing shaping of our own disciplinary thinking.

This is a thorough academic work with a fresh approach to our understanding of pre-war Europe. It contains a number of images, beautifully reproduced in color and black-and-white. For academic collections of Jewish history and ethnography

10 hours 49 min ago
In honor of the #CityofDetroit turning 321 years old on July 24th, WSUPress will be showcasing one Detroit Book of… https://t.co/PA7nONh4C0
15 hours 52 min ago
OUR FALL & WINTER 2022 TITLES ARE NOW AVAILABLE FOR PRE-ORDER! Grab your copy of any of our fall & winter titles f… https://t.co/qDykAsF9sk
2 days 17 hours ago
Happy Pub Date to THE SPOOK WHO SAT BY THE DOOR, SECOND EDITION! This new edition of a literary classic now includ… https://t.co/XrCsLZvf4D