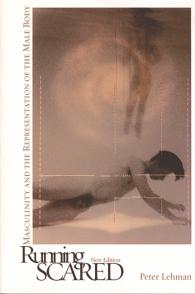 Masculinity and the Representation of the Male Body

What a welcome return to print! Peter Lehman's Running Scared was an instant classic when it appeared fifteen years ago. Everything he observed first has been increasingly well studied; every trend he predicted has come to pass. Now readers can see it for themselves!

Running Scared responds to the absence of critical attention to male sexuality in film by bringing representations of phallic masculinity into the spotlight. In his analysis of films, novels, paintings, photographs, popular music, jokes, and videos, Peter Lehman investigates the patriarchal culture that keeps the male body—and especially male genitals—out of sight. Lehman documents the pervasive anxiety underlying images of the male body, arguing that attempts to keep male sexuality hidden in the pursuit of "good taste" and an avoidance of perversion maintains the "male mystique" and preserves the power of the phallus.

Lehman examines representations of the male body and male sexuality in a variety of settings and through many different lenses. Among the films he analyzes are Howard Hawks’s Rio Bravo and Rio Lobo; Scarlet Street; feral child films The Wild Child, Kaspar House, and Greystoke; and Nagisa Oshima’s In the Realm of the Senses. In these works, Lehman explores the symbolic enculturation of males, assumptions about power and the male body, and the ways that men’s and women’s bodies are marked differently with regard to scarring, wounding, and aging. In addition to film, Lehman also considers such varied material as Jim Thompson’s noir novel The Nothing Man, sexology and medical representations of male sexuality, the video Dick Talk, penis jokes in Hollywood films of the 1970s and 1980s, and popular music by Roy Orbison. This edition of Running Scared also includes a new chapter on male nudity in the films of the 1990s, adding fresh analysis to this classic text. An updated preface situates the book within the current critical climate.

Scholars of film studies, cultural studies, and gender studies and general readers interested in representations of gender and sexuality will appreciate this valuable text.

How wonderful to have Running Scared back in print. And in a new edition! Not content to rest on his definitive take on Hollywood's representations of the male body, Lehman brings his scrupulous analysis and theoretical sophistication to independent documentary, pornographic film, ancient Greek art, and much more."

What a welcome return to print! Peter Lehman's Running Scared was an instant classic when it appeared fifteen years ago. Everything he observed first has been increasingly well studied; every trend he predicted has come to pass. Now readers can see it for themselves!"

– Michael Kimmel, editor of Men and Masculinities: A Social, Cultural, and Historical Encyclopedia

This welcome new edition of Lehman's groundbreaking work on the male body retains the earlier invaluable insights and adds an important chapter exploring recent developments in film and the significance of the Internet as a source of another discourse on sexual representation."

– Robert Eberwein, author of Armed Forces: Masculinity and Sexuality in the American War Film and Sex Ed: Film, Video, and the Framework of Desire

1 day 3 hours ago
Happy Pub Date to THE SPOOK WHO SAT BY THE DOOR, SECOND EDITION! This new edition of a literary classic now includ… https://t.co/XrCsLZvf4D
1 day 3 hours ago
RT @DarkProjections: Returned from a great two weeks in Europe to find copies of my new book! Kolchak:The Night Stalker, one of the Pion… https://t.co/kPJ5kKLRyr
2 days 6 min ago
RT @oneitadetroit: Thrilled that @WSUPress is releasing the 2E of Sam Greenlee's "The Spook Who Sat by the Door" tomorrow. Introductio… https://t.co/hZpAjxluIl