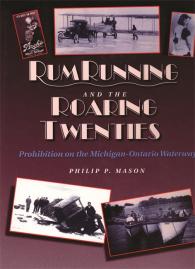 Rum Running and the Roaring Twenties

Prohibition on the Michigan-Ontario Waterway

Mason takes you back to the era when Detroit was on top of the world, a boom town throwing off the new wealth of the auto industry and creating a new way of life for the working class.

On January 17, 1920, the Eighteenth Amendment took effect in the United States, prohibiting the manufacture, sale, use, or importation of alcoholic beverages except for scientific and medicinal purposes. Church and business leaders, temperance advocates, and state and national officials predicted that a tranquil new era was about to begin-an era when prisons would be empty, police forces could be drastically cut, and workers would be more productive, spending time with their families rather than in saloons.

As Rumrunning and the Roaring Twenties illustrates, peace and tranquillity and abstinence never arrived. The Prohibition experiment failed dismally in the United States, and nowhere worse than in Michigan. The state's close proximity and easy access to Canada, where large amounts of liquor were manufactured, made it a major center for the smuggling and sale of illegal alcohol. Although federal, state, and local law enforcement agencies attempted to stop the flow of liquor into Michigan and its widespread sale and use in blind pigs, joints, speakeasies, and exclusive clubs and restaurants, an astounding seventy-five percent of all illegal liquor brought into the United States
was transported across the Detroit River from Canada, especially the thirty-mile stretch from Lake Erie to the St. Clair River. In fact, the city's two major industries during most of the 1920s were the manufacture of automobiles and the distribution of Canadian liquor.

Using police and court records, newspaper accounts, and interviews with those who lived during the time, Philip P. Mason has constructed a fascinating history of life in Michigan during Prohibition. He regales readers with stories of the bungled efforts by officials at every level to control the smuggling and sale of illegal alcohol. Most entertaining are the hundreds of photos capturing the essence of the era: the creative smuggling efforts undertaken by citizens of all walks of life-the poor, middle class, and affluent, upstanding citizens and organized criminals and gang members.

The smugglers concocted both practical and ingenious methods to transport liquor into the state. Boats of all sizes were used, from small rowboats to powerful river crafts that could easily outrun police boats. Jalopies, trucks, airplanes, and railroad freight cars also carried large amounts of alcohol across the border. Clever smugglers rigged electronically controlled torpedoes to cross the river, laid pipes underwater and pumped alcohol into a bottling facility in Detroit, and concealed contraband in every conceivable device-hot water bottles, chest protectors, false breasts, hollowed out eggs and loaves of bread, picnic baskets, shopping bags, and baby carriages.

By 1928 Prohibition was so obviously flawed and controversial that it became a major issue in the presidential campaign. In 1933, with the support of President Franklin Roosevelt, Michigan's governor William Comstock, and other leaders, the Twenty-first Amendment was passed, repealing Prohibition. Michigan was the first state to ratify the amendment on April 10, 1933, and soon the Detroit River was returned to pleasure boats and fishing and commercial vessels whose holds no longer carried illegal liquor.

Philip P. Mason is Distinguished Professor of History at Wayne State University and the former director of the Archives of Labor & Urban
Affairs at the Walter P. Reuther Library. He is the author of The Ambassador Bridge and the editor of Copper Country Journal. Professor
Mason received his Ph.D. from the University of Michigan.

Mason takes you back to the era when Detroit was on top of the world, a boom town throwing off the new wealth of the auto industry and creating a new way of life for the working class."