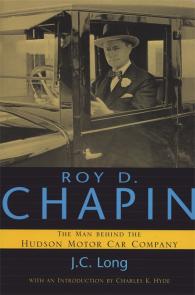 The Man Behind the Hudson Motor Car Company

J. C. Long
With an Introduction by Charles K. Hyde

A biography of Roy D. Chapin, one of the most significant figures in the first third-century of the American automobile, is long overdue. I salute the decision to publish Roy D. Chapin: The Man behind the Hudson Motor Car Company.

"John Cuthbert Long’s Roy D. Chapin is a thorough and detailed biography of a remarkable, but little-known Detroit automobile industry pioneer. Historians should include Roy Dikeman Chapin (February 23, 1880–February 16, 1936) in any listing of significant American auto industry pioneers, along with the Duryea brothers, Ransom E. Olds, Henry Leland, Henry Ford, William C. Durant, and the Dodge brothers. Outside the cloister of automotive historians, Roy Chapin is an unknown. This is in part because no company or car bore his name. Unlike many contemporary auto pioneers, Roy Chapin was a modest man who did not promote himself. Even Long’s superb biography of Chapin is not well-known because it was privately printed in 1945 with a small press run. In reprinting this volume, Wayne State University Press is making an important contribution to automotive history."
—From the introduction by Charles K. Hyde, Department of History, Wayne State University

J. C. Long published fourteen books between 1923 and 1968, nine of them biographies. Also during his lifetime, Long managed the education department of the National Automobile Chamber of Commerce, served on the editorial staff of the New Yorker, and was the manager of publications for Bethlehem Steel Company.

This is an excellent book for amateurs, enthusiasts, or introductory students beginning their study of historical archaeology. This is the first introductory text that fully encapsulates the excitement and enthusiasm many feel in asking questions of the unknown, shedding light on the forgotten, and sharing histories with others to ignite the intrigue felt about the past."

– Journal of the Society for Industrial Archeology

One of America's greatest auto pioneers is honored in this polished and ever so readable biography. This book is essential to automotive historians and Hudson lovers as food and shelter!"

Since 1945 J. C. Long's biography of Roy Chapin has been an undiscovered gem, known primarily to the few hundred people to whom Chapin's widow Inez distributed the original printing. Now this superb recounting of the story of a key auto pioneer is available to a wide audience. Anyone interested in the history of the twentieth century's most influential industry will be grateful."

– Robert Casey, John and Horace Dodge Curator of Transportation at The Henry Ford

Rated three (out of four stars): Worth reading. We believe Hudson fans will eagerly assign a fourth star [for an] Absolute Must rating."

A biography of Roy D. Chapin, one of the most significant figures in the first third-century of the American automobile, is long overdue. I salute the decision to publish Roy D. Chapin: The Man behind the Hudson Motor Car Company."