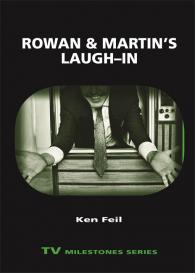 The highest-rated network program during its first three seasons, comedy-variety show Rowan and Martin’s Laugh-In (NBC, 1968–1973) remains an often overlooked and underrated innovator of American television history. Audiences of all kinds—old and young, square and hip, black and white, straight and queer—watched Laugh-In, whose campy, anti-establishment aesthetic mocked other tepid and serious popular shows. In Rowan and Martin’s Laugh-In, author Ken Feil presents the first scholarly investigation of the series whose suggestive catch-phrases "sock it to me," "look that up in your Funk’n’Wagnalls," and "here comes the judge" became part of pop culture history.

In its playful put-ons of the establishment, parade of countercultural types and tastes, and vacillation between identification and repulsion, Feil argues that Laugh-In’s intentional ambiguity was part and parcel of its inventiveness and commercial prosperity. Fans of the show as well as readers interested in American television and pop culture history will enjoy this insightful look at Rowan and Martin’s Laugh-In.

Ken Feil is senior scholar-in-residence in the Visual and Media Arts Department at Emerson College. He is the author of Dying for a Laugh: Disaster Movies and the Camp Imagination and has most recently contributed to the collections Queer Love in Film and Television and Reading the Bromance (Wayne State University Press, 2014).

Ken Feil’s investigation of Rowan & Martin’s Laugh-In examines how the turbulent cultural changes of the late 1960s to early 1970s were managed at the peak of the classic network era by television producers and networks.

In this brilliant and compelling analysis, Ken Feil skillfully reveals the intricate strategies that Laugh-In devised to illuminate and critique the obsessions, preoccupations, and contradictions of American popular culture of the late 1960s and early 1970s. Feil’s treatment of camp and taste is consistently nuanced and insightful, as is his investigation of the show’s skilful negotiation of politics, sex, and sexuality—a negotiation that managed to captivate conservative and liberal audiences alike. Required reading not only for Laugh-In fans but for anyone interested in better understanding the complexities of the sexual revolution through the study of popular culture.