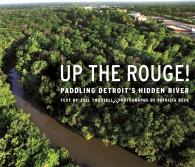 Up the Rouge! Is an unflinchingly honest look at what the proximity of a city does to a river, as well as an eye-opening journey.