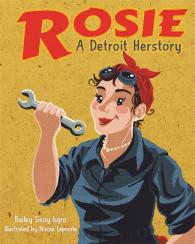 Rosie, a Detroit Herstory is a remarkable story for young readers about women workers during World War II. At this time in history, women began working jobs that had previously been performed only by men, such as running family businesses, operating machinery, and working on assembly lines. Across America, women produced everything from ships and tanks, to ammunition and uniforms, in spectacular quantities. Their skill, bravery, tenacity, and spirit became a rallying point of American patriotism and aided in defining Detroit as the Arsenal of Democracy. Even though women workers were invaluable to the war effort, they met with many challenges that their male counterparts never faced. Yet, for all of their struggles, their successes were monumental. Today, we refer to them as "Rosies"—a group of women defined not by the identity of a single riveter but by the collective might of hundreds of thousands of women whose labors helped save the world.

Rosie, a Detroit Herstory features informative, rhyming text by Bailey Sisoy Isgro and beautifully illustrated original artwork by Nicole Lapointe. The story begins with the start of the Second World War and the eventual need for women to join the American workforce as men shipped out to war. By the end of the story, readers will have a better understanding of who and what Rosie the Riveter really was, how Detroit became a wartime industrial powerhouse, and why the legacy of women war workers is still so important. A glossary is provided for more difficult concepts, as well as a timeline of events.

SIsoy Isgro and Lapointe first came up with the idea for the book on a ten-hour drive to the 2017 Women’s March in Washington, D.C., inspired by the overwhelming number of women who came together for the event. Rosie, a Detroit Herstory is written for children ages 8 to 12, but any reader interested in Detroit or women in history will appreciate this entertaining chronicle.

Bailey Sisoy Isgro is the owner of Detroit History Tours and the proprietress of the Detroit History Club. She works as an automotive sculptor by day and by night she writes and lectures on the history of her fine city.

Nicole Lapointe is a local Detroit freelance artist and resident geek. When she’s not working on art she can be found volunteering around town, dressing up in costumes, biking, roller skating, and digging around for weird Detroit tales.

Rosie, a Detroit Herstory is delightful and also insightful. For someone who thought she knew the story, this beautifully written and illustrated book proves there is always so much more to know. As Bailey Sisoy Isgro shows us, Rosie is inside us all.

– Amy Haimerl, author of Detroit Hustle: A Memoir of Life, Love, and Home

Rosie, A Detroit Herstory is a poetic resurrection of a story that wallops in history, women, and Detroit. It reminds us that we can indeed do anything.

Rosie, a Detroit Herstory recalls the invaluable contributions made by women workers (the Rosies) to the Allied victory in World War II through their work in Detroit’s war industries. Bailey Sisoy Isgro’s words and Nicole Lapointe’s marvelous illustrations combine to recall the dedicated and patriotic heroines who played such vital roles in the war effort.

Bailey Sisoy Isgro and Nicole Lapointe have created a sweeping look at female empowerment in Detroit during World War II. The story of Rosie and her kin will inspire women young and old with its dramatic story, amazing illustrations, and detail-rich rhymes. This book makes history a pleasure for all ages.

– Karen Dybis, journalist and author of Better Made in Michigan: The Salty Story of Detroit's Best Chip

The story behind the iconic image of Rosie the Riveter unfolds in rhyming verse and colorful illustrations that convey
the strength, bravery, diversity, and patriotism of the hardworking women on the home front during World War II. The
automotive factories of Detroit were rededicated to the production of bombers, tanks, battleships, and bullets; a
unique slice of Americana emerges, complete with a detailed historical timeline, glossary, and photographs of talented
"Rosies" riveting, welding, drilling, and making history.

I loved that this book was a history lesson for me. I learned about Detroit and I also learned a lot of new words like luftwaffe, Axis powers and isolationist. I also learned the word Nazi. It’s a scary and sad word. I recommend this book to anyone who needs to know there is no such thing as "the wrong sex" and everyone should be accepted to do anything, no matter the gender.

"Rosie, A Detroit Herstory" offers an inspiring lesson to children about the profound role women can play with hard work and determination.

A welcome and highly recommended picture book history of the contributions of women during a time of global war, "Rosie, a Detroit Herstory" is an especially and unreservedly recommended addition to family, elementary school, and community library collections.

This well-told story introduced readers to one of the most remarkable and major social, cultural, and economic changes in American and women's history. [...] This book offers children valuable insights into a significant and often overlooked aspect of American history and how World War II changed forever women's place in society.

I liked that this book was about women can do things that men can too. I liked learning about the history. I really liked the illustrations. I think teachers should use this in their classrooms and libraries so kids can learn about this.

– Bridget, age 9, Bridget and the Books

2 days 47 min ago
Now a National Jewish Book Award Finalist! @JewishBook https://t.co/qTKAeUEPVX
2 days 4 hours ago
RT @Steph_Steinberg: Tomorrow @ 7 p.m.! Join me and @DETWritingRoom at The Whitney for our first #2023AuthorSeries event ft. @waynestate… https://t.co/pssbi2NLNs
6 days 5 hours ago
SAVE THE DATE! Join author Desiree Cooper and illustrator Bec Sloane this Saturday for a behind the scenes look at… https://t.co/cKDBmbewOa