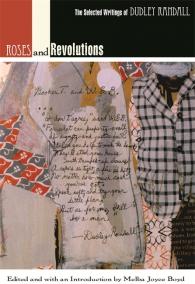 The Selected Writings of Dudley Randall

Edited and with an Introduction by Melba Joyce Boyd

Boyd has done us a great service in bringing together many of Randall's disparate writings in one volume.

Dudley Randall was one of the foremost voices in African American literature during the twentieth century, best known for his poetry and his work as the editor and publisher of Broadside Press in Detroit. While he published six books of poetry during his life, much of his work is currently out of print or fragmented among numerous anthologies. Roses and Revolutions: The Selected Writings of Dudley Randall brings together his most popular poems with his lesser-known short stories, first published in The Negro Digest during the 1960s, and several of his essays, which profoundly influenced the direction and attitude of the Black Arts movement.

Roses and Revolutions: The Selected Writings of Dudley Randall is arranged in seven sections: "Images from Black Bottom," "Wars: At Home and Abroad," "The Civil Rights Era," "Poems on Miscellaneous Subjects," "Love Poems," "Dialectics of the Black Aesthetic," and "The Last Leap of the Muse." Poems and prose are mixed throughout the volume and are arranged roughly chronologically. Taken as a whole, Randall’s writings showcase his skill as a wordsmith and his affinity for themes of love, human contradictions, and political action. His essays further contextualize his work by revealing his views on race and writing, aesthetic form, and literary and political history. Editor Melba Joyce Boyd introduces this collection with an overview of Randall’s life and career.

The collected writings in Roses and Revolutions not only confirm the talent and the creative intellect of Randall as an author and editor but also demonstrate why his voice remains relevant and impressive in the twenty-first century. Randall was named the first Poet Laureate of the City of Detroit and received numerous awards for his literary work, including the Life Achievement Award from the National Endowment of the Arts in 1986. Students and teachers of African American literature as well as readers of poetry will appreciate this landmark volume.

In this brilliant-and necessary-book, Melba Joyce Boyd has made accessible in one volume the major body of Dudley Randall's work. She combines in thematic sections related genres, which illustrate the variety and scope of his writing. Her insightful introduction provides helpful biographical information and a road map for reading the book. Roses and Revolutions is a major scholarly achievement."

An elegantly introduced and lovingly edited volume befitting the prodigious labors of a brilliant and loving poet. A fine gift to Black literary and cultural studies."

Roses and Revolutions is a seminal addition to any literary collection focusing on African American literary history."

This collection, edited by Melba Joyce Boyd and opening with an introduction from her, unites much of his work into one volume, showcasing his skill as a poet and his ability to twist together themes as seemingly disparate as love, identity, and politics. Boyd has done us a great service in bringing together many of Randall's disparate writings in one volume. Let's not forget him. He never seemed to forget who he was or where he was from. And he never wavered a bit in seeking justice."

2 days 28 min ago
Now a National Jewish Book Award Finalist! @JewishBook https://t.co/qTKAeUEPVX
2 days 3 hours ago
RT @Steph_Steinberg: Tomorrow @ 7 p.m.! Join me and @DETWritingRoom at The Whitney for our first #2023AuthorSeries event ft. @waynestate… https://t.co/pssbi2NLNs
6 days 5 hours ago
SAVE THE DATE! Join author Desiree Cooper and illustrator Bec Sloane this Saturday for a behind the scenes look at… https://t.co/cKDBmbewOa