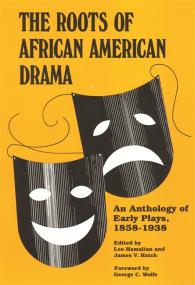 The Roots of African American Drama

A testimony to the roots of African-American literature and their influences on contemporary work.

While many historically significant or interesting plays by white playwrights are easily found in anthologies, few by early African American writers are equally accessible. Indeed until the 1970s, almost none of these early plays could be located outside of a library.

The Roots of African American Drama fills this gap. Five of the thirteen scripts included here have never been in print, and only three others are presently available anywhere. The plays represent a variety of styles—allegory, naturalism, realism, melodrama, musical comedy, and opera. Four are full length, eight are one-acts, and one is a skit. Their subjects include slavery, share-cropping, World War I, vaudeville, religion, and legend and mythology.

In making their selections, the editors used a variety of criteria to insure each play is dramatically sound and historically important. They also searched for those scripts that were unjustly consigned to obscurity. Each selection begins with headnotes that place it in its historical and cultural context. Biographic information and a bibliography
of other plays follow each script, providing readers with added sources for study.

Leo Hamalian, a Ph.D. from Columbia University, is a professor of English at The City College of New York. He has written or edited more than one dozen volumes, including As Others See Us and In Search of Eden, and is currently editor of Ararat.

James V. Hatch is a professor of English at the City University of New York. A Ph.D. from the University of Iowa, he edited Black Theatre in the U.S.A., 1847-1974 and Black Playwrights, 1825-1977: An Annotated Bibliography.

George C. Wolfe wrote The Colored Museum, the 1986 satire of black American life, and directed Spunk, which he adapted from three tales by Zora Neale Hurston.

A testimony to the roots of African-American literature and their influences on contemporary work . . . Comparisons and contrasts between the traditional canon and this new collection offer parallels that would . . . make this work a fine textbook as well. [An] essential work.

12 hours 54 min ago
RT @DarkProjections: Celebrating #Kolchak release day with an appearance on @richardsyrett’s Strange Planet. We talk all things NIGHT ST… https://t.co/96VJZhpsti
17 hours 24 min ago
RT @zoebossiere: So thrilled to announce a new anthology, THE LYRIC ESSAY AS RESISTANCE: TRUTH FROM THE MARGINS, w/ @ericatrabold av… https://t.co/LixsspYdKb
1 day 10 hours ago
Today marks the 4th anniversary of the passing of the Queen of Soul, Aretha Franklin. In THE QUEEN NEXT DOOR, phot… https://t.co/DbwToz8ff4