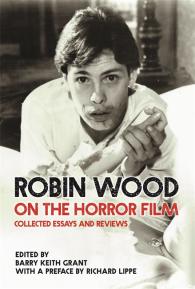 Robin Wood on the Horror Film

Edited by Barry Keith Grant
With a preface by Richard Lippe

Robin Wood—one of the foremost critics of cinema—has laid the groundwork for anyone writing about the horror film in the last half-century. Wood’s interest in horror spanned his entire career and was a form of popular cinema to which he devoted unwavering attention. Robin Wood on the Horror Film: Collected Essays and Reviews compiles over fifty years of his groundbreaking critiques.

In September 1979, Wood and Richard Lippe programmed an extensive series of horror films for the Toronto International Film Festival and edited a companion piece: The American Nightmare: Essays on the Horror Film — the first serious collection of critical writing on the horror genre. Robin Wood on the Horror Film now contains all of Wood’s writings from The American Nightmare and nearly everything else he wrote over the years on horror—published in a range of journals and magazines—gathered together for the first time. It begins with the first essay Wood ever published, "Psychoanalysis of Psycho," which appeared in 1960 and already anticipated many of the ideas explored later in his touchstone book, Hitchcock’s Films. The volume ends, fittingly, with, "What Lies Beneath?," written almost five decades later, an essay in which Wood reflects on the state of the horror film and criticism since the genre’s renaissance in the 1970s. Wood’s prose is eloquent, lucid, and convincing as he brings together his parallel interests in genre, authorship, and ideology. Deftly combining Marxist, Freudian, and feminist theory, Wood’s prolonged attention to classic and contemporary horror films explains much about the genre’s meanings and cultural functions.


Robin Wood on the Horror Film will be an essential addition to the library of anyone interested in horror, science fiction, and film genre.

Robin Wood was a founding editor of CineAction! and author of numerous influential works, including new editions published by Wayne State University Press of Personal Views: Explorations in Film (2006), Howard Hawks (2006), Ingmar Bergman (2013), Arthur Penn (2014) and The Apu Trilogy (2016). He was professor emeritus at York University, Toronto, and the recipient of a Lifetime Achievement Award from the Society for Cinema and Media Studies.

Barry Keith Grant is professor emeritus of film studies and popular culture at Brock University in Ontario, Canada. The author or editor of more than two dozen books, Grant’s work has appeared in numerous journals and anthologies. An Elected Fellow of the Royal Society of Canada, he is editor of Wayne State University Press’s Contemporary Approaches to Film and Media Series.

Robin Wood was the most important film critic of our age; his commitment to discovering and evaluating the significant constantly informed his judgments. Is there an earthly reason for not reading this collection?

Our understanding of the horror film and indeed of horror studies writ large would simply not be the same without Robin Wood. He taught us how much meaning horror offers us. This indispensable collection will provoke and inspire viewers and readers of all kinds for years to come.

Robin Wood was a brilliant critic and theorist whose work helped define the very field of film studies in the 1960s and 1970s. Among his most significant contributions—building upon concepts from Marx and Freud—was his theorization of the horror film as Western culture’s collective nightmare. This much-needed volume collects those seminal essays in one place, in recognition of their ongoing importance to horror studies specifically and media studies more broadly.

Such a pleasure to have all of Robin Wood’s writings on the horror movie assembled in one volume. His work was a great encouragement to those of us wanting to take seriously this most unfairly maligned of popular genres, and although I may often have disagreed with him, his subtlety of analysis was such as to always make that disagreement constructive.

Robin Wood’s oeuvre serves as an illustrated timeline of the horror film’s recognition as a form demanding serious critical attention. Grant has given us in a single volume Wood’s beatitudes for the genre—paradoxes, confluences, conundrums, convergences—attesting to its dark beauty, by which we come to better know ourselves.

– Sarah Juliet Lauro, assistant professor at the University of Tampa, author of The Transatlantic Zombie, and editor of Zombie Theory: A Reader

We still need Robin Wood, for his integrity, commitment to politically progressive cinema, lucidity, effortless mastery of film form and its meanings, fearless championing of the undervalued and disreputable form of the horror film, and his unwavering and acute understanding of the importance of film to our understanding of the lived experience of gender, sexuality, and the body.

Perhaps more than any other book bearing his name, Robin Wood on the Horror Film clearly foregrounds the political stakes of film studies. In the contemporary moment, it is an example worthy of emulation. If RobinWood still represents something repressed, perhaps it is by our following his example and rewhetting the field’s appetite for radical politics that he can return, even in death.