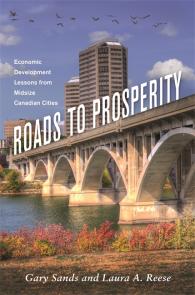 Gary Sands and Laura A. Reese

Roads to Prosperity: Economic Development Lessons from Midsize Canadian Cities explores the relative prosperity of midsize Canadian urban areas (population 50,000 to 400,000) over the past two decades. Communities throughout North America have strived for decades to maintain and enhance the prosperity of their residents. In the areas that are the focus of this research, the results of these efforts have been mixed—some communities have been relatively successful while others have fallen further behind the national averages. Midsize cities often lack the resources, both internal and external, to sustain and enhance their prosperity. Policies and strategies that have been successful in larger urban areas may be less effective (or unaffordable) in smaller ones.

Roads to Prosperity first examines the economic structure of forty-two Canadian urban regions that fall within the midsize range to determine the economic specializations that characterize these communities and to trace how these specializations have evolved over the time period between 1991 and 2011. While urban areas with an economic base of natural resource or manufacturing industries tend to retain this economic function over the years, communities that rely on the service industries have been much more likely to experience some degree of restructuring in their economies over the past twenty years. The overall trend among these communities has been for their employment profiles to become more similar and for their economic specialization to fade over time. The second part of the book looks at a number of currently popular economic development strategies as they have been applied to midsize urban areas and their success and failures. While there appears to be no single economic development strategy that will lead to greater prosperity for every community, Sands and Reese explore the various factors that help eplain why some work and others don’t.

Those with an interest in urban planning and community development will find this monograph highly informative.

Gary Sands is professor emeritus of urban planning at Wayne State University. Sands is the author or co-author of seven books and symposia, more than fifty book chapters and journal articles, and numerous technical reports and working papers. His research has focused on how local housing markets are influenced by government development regulations, and on the costs and benefits of economic development strategies.

Laura A. Reese is professor of political science and the founding director of the Global Urban Studies Program (GUSP) at Michigan State University. She is the editor of the Global Urban Book Series for Routledge Publications. Her main research and teaching areas are in urban politics and public policy, economic development, and local governance and management in Canada and the United States. She has written eleven books and over one hundred articles and book chapters in these areas as well as public personnel administration focusing on the implementation of sexual harassment policy.

Creating creative, cool, and safe city spaces takes money and an attitude of optimism along with leadership—both public and private sector—a factor mostly missing in city efforts to revitalize, stay relevant, and attractive to the creative class. As Sands and Reese assert, this sort of insight will require more study.

The empirical evidence Sands and Reese present offers welcome nuances to the bold claims of the creative class approach, New Urbanism, and the message of promoters of casinos as instruments of economic development.

– Pierre Filion, professor in the School of Planning at University of Waterloo

The value of this book lies in its detailed examination of revitalization tactics tried by city after city. It successfully debunks many of the most highly touted tactics that are the stuff of headlines.

4 hours 36 min ago
HAPPY PUB DATE! Dan Gerber said "If you make yourself available to Cindy Hunter Morgan’s poems, they will revivif… https://t.co/L60dTqsUUj
1 day 36 min ago
Grab your copy or e-book of @fkwang's YOU CANNOT RESIST ME WHEN MY HAIR IS IN BRAIDS today! https://t.co/htFDjNa9yj https://t.co/zHyt049441
4 days 3 hours ago
Wayne State University Press is proud to announce our winner and finalists of the 2022 Next Generation Indie Book A… https://t.co/Ozy1WEQY1i