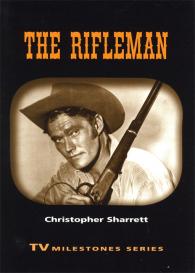 The Rifleman is perhaps the most significant and intelligent of the TV westerns from the late 1950s—an era when the western was the dominant television genre. With its story of a single father raising a son in 1880s New Mexico, The Rifleman offered many alternatives to the conventions of the western. It also embodied many of the genre’s contradictions, setting its ideas about domesticity and level-headedness alongside the gun violence adopted by westerns as central to the settling of the West and the creation of America. With its initial episodes written and directed by celebrated auteur Sam Peckinpah, and the overall series produced by veteran Dick Powell and the pioneering television production team of Jules Levy, Arthur Gardner, and Arnold Laven, The Rifleman is distinguished by its stewardship of some of the most talented minds of early television.

In his succinct study of this television milestone, Christopher Sharrett uses television studies, psychoanalytic criticism, gender studies, and American studies to place The Rifleman within the TV western genre and early television culture. While discussing the intelligence and lasting value of this series, Sharrett also challenges the reader to consider the broader role of 1950s television in shaping the consciousness of the postwar generation. The Rifleman remains one of the great examples of the stalemates within American mass culture: the struggle between reason and violence.

Christopher Sharrett is professor of film and communication at Seton Hall University. He is editor of Mythologies of Violence in Postmodern Media (Wayne State University Press, 1999).

Even if you never saw The Rifleman when it originally aired, this book is bursting with intriguing and well-structured commentary, as Sharrett examines the series with effortless competence, as it amazingly apt at distilling the show's themes and placing it in context, both then and now."

The Rifleman is a milestone book for both television and cultural studies. Using perceptive close readings of individual episodes and descriptions of creative contributions of important figures like Sam Peckinpah, it makes a compelling case for the enduring value of the series. It also insightfully contextualizes the series within the 1950s/1960s television and film industries, Cold War ideology, and shifts in postwar masculinity."

Politically astute and exhaustively researched, Sharrett's monograph is a significant contribution to television studies. It is also a compelling account of how, during the years of the Cold War, theentertainment industry taught Americans to understand themselves through the genre of the western."