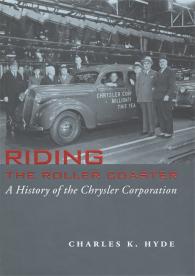 A History of the Chrysler Corporation

Carefully documented, well written and full of detail, history professor Charles Hyde brings facts and figures together into the often astonishing story of Chrysler, right up to the merger with Daimler in 1998.

From the Chrysler Six of 1924 to the front-wheel-drive vehicles of the 70s and 80s to the minivan, Chrysler boasts an impressive list of technological "firsts." But even though the company has catered well to a variety of consumers, it has come to the brink of financial ruin more than once in its seventy-five-year history.

How Chrysler has achieved monumental success and then managed colossal failure and sharp recovery is explained in Riding the Roller Coaster, a lively, unprecedented look at a major force in the American automobile industry since 1925. Charles Hyde tells the intriguing story behind Chrysler-its products, people, and performance over time-with particular focus on the company's management. He offers a lens through which the reader can view the U.S. auto industry from the perspective of the smallest of the automakers who, along with Ford and General Motors, make up the "Big Three."

The book covers Walter P. Chrysler's life and automotive career before 1925, when he founded the Chrysler Corporation, to 1998, when it merged with Daimler-Benz. Chrysler made a late entrance into the industry in 1925 when it emerged from Chalmers and Maxwell, and further grew when it absorbed Dodge Brothers and American Motors Corporation. The author traces this journey, explaining the company's leadership in automotive engineering, its styling successes and failures, its changing management, and its activities from auto racing to defense production to real estate. Throughout, the colorful personalities of its leaders-including Chrysler himself and Lee Iacocca-emerge as strong forces in the company's development, imparting a risk-taking mentality that gave the company its verve.

Carefully documented, well written and full of detail, history professor Charles Hyde brings facts and figures together into the often astonishing story of Chrysler, right up to the merger with Daimler in 1998. The 385-page hardbound book includes 60 carefully chosen black-and-white pictures.

Charles Hyde has written the first authoritative and complete scholarly history of the Chrysler Corporation. This cogent and insightful work details the company's antecedent business roots in early automobile ventures and traces Chrysler's activities through economic cycles, war production, postwar struggles and successes, and finally its merger with Daimler-Benz. A rich business history made more colorful by the self-styled leadership of Walter Chrysler and Lee Iacocca.

With exquisite scholarship and a deft pen, Charles Hyde tells the story [of the history of Chrysler].

Charles Hyde's book, Riding the Roller Coaster, is a welcome addition to anyone's library of automotive history. This detailed examination of how an eminent 20th century corporation went about its business ranges from the origins of Chrysler (and even its predecessor firms) right up to the modern times of DaimlerChrysler. This volume will serve as a standard reference on the history of an American auto maker, its successes and its failures.

As the title indicates, Charles Hyde's history of the Chrysler Corporation takes the reader on a historical journey marked by exhilarating climbs, severe descents, and disorienting changes of direction. The meticulous scholarship never gets in the way of a good story, one that shows how the business cycle, changing consumer tastes, governmental regulations, and management decisions impelled the wild ride taken by America's third largest automobile firm.