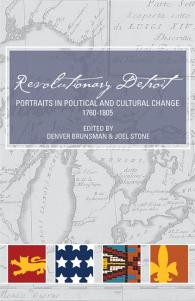 The people of Detroit experienced the American revolutionary era in unique ways. More than any locale in North America, it was where French, British, American, and Native American cultures collided and melded during the second half of the eighteenth century. The British takeover of Detroit from the French in 1760 and Pontiac's War in 1763 brought revolutionary changes to the frontier town earlier than most places. Instability also lasted longer. The British did not relinquish control of its largest outpost on the Great Lakes until 1796-thirteen years after the United States won its independence. Ultimately, the American Revolution introduced international boundaries to a region where the Detroit River had always been a highway, not a border.

The essays in this volume put a human face on this fascinating and fiery period of Detroit's past. Each provides a portrait into how an individual, family, or other group responded to and shaped the dramatic changes around them. Revolutionary Detroit witnessed murders, betrayals, hangings, shipwrecks, slavery, servitude, captive-taking, and more. The town serves as an ideal historical laboratory for analyzing military actions, shifting alliances, and cultural interactions on the frontier during a particularly volatile time.

As the meeting ground for multiple empires and Indian tribes, Detroit might very well have been the most interesting place in colonial America during the eighteenth century. The well-written, deeply-researched, and imaginative essays contained here recapture the dynamism of this essential Great Lakes crossroads.