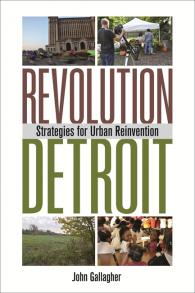 John Gallagher turns what could be a dry academic treatise into a vibrant page turner.

After decades of suburban sprawl, job loss, and lack of regional government, Detroit has become a symbol of post-industrial distress and also one of the most complex urban environments in the world. In Revolution Detroit: Strategies for Urban Reinvention, John Gallagher argues that Detroit's experience can offer valuable lessons to other cities that are, or will soon be, dealing with the same broken municipal model. A follow-up to his award-winning 2010 work, Reimagining Detroit, this volume looks at Detroit's successes and failures in confronting its considerable challenges. It also looks at other ideas for reinvention drawn from the recent history of other cities, including Cleveland, Flint, Richmond, Philadelphia, and Youngstown, as well as overseas cities, including Manchester and Leipzig.

Revolution Detroit surveys four key areas: governance, education and crime, economic models, and the repurposing of vacant urban land. Among the topics Gallagher covers are effective new urban governance models developed in Cleveland and Detroit; new education models highlighting low-income-but-high-achievement schools and districts; creative new entrepreneurial business models emerging in Detroit and other post-industrial cities; and examples of successful repurposing of vacant urban land through urban agriculture, restoration of natural landscapes, and the use of art in public places. He concludes with a cautious yet hopeful message that Detroit may prove to be the world's most important venue for successful urban experimentation and that the reinvention portrayed in the book can be repeated in many cities.

Gallagher's extensive traveling and research, along with his long career covering urban redevelopment for the Detroit Free Press, has given him an unmatched perspective on Detroit's story. Readers interested in urban studies and recent Detroit history will appreciate this thoughtful assessment of the best practices and obvious errors when it comes to reinventing our cities.

John Gallagher is a veteran journalist and author whose latest book, Reimagining Detroit: Opportunities for Redefining an American City (Wayne State University Press, 2010), was named by the Huffington Post as among the best social and political books of 2010. He joined the Detroit Free Press in 1987 to cover urban and economic redevelopment efforts in Detroit and Michigan, a post he still holds. His other books include Great Architecture of Michigan and, as co-author, AIA Detroit: The American Institute of Architects Guide to Detroit Architecture. John and his wife, Sheu-Jane, live along Detroit's east riverfront.

Named Best Detroit Book by Real Detroit Weekly! A couple years back folks voted John Gallagher's book Reimagining Detroit the best Detroit book, so it's no wonder this former Free Press writer's follow up came to be just as well-liked. Expounding on strategies to help revitalize the city, the
193 page book makes what could be a rather dry subject into something that ignites fascination in the multi-layered city we all know and love. Plus, it's available on Kindle!

John Gallagher turns what could be a dry academic treatise into a vibrant page turner, a carefully constructed narrative that weaves the colorful stories of politicians, city planners and ordinary people into identifying and solving the great challenges presented by the global move from a manufacturing economy to one that is knowledge-based.

I greatly appreciated Gallagher’s sincerity. He is clearly and unapologetically an advocate for the city. Gallagher writes about [strategies] in a fresh, engaging, and interesting manner. The book also introduces the reader to a broad range of Detroit’s community and economic development 'urban heroes. . . . Gallagher’s work provides many useful ideas regarding tools and mechanisms available to planners, policymakers, community organizations, and neighborhood residents.

4 hours 35 min ago
Happy Pub Date! HOUSE AND HOME is a collection of poems that intensely explore the beauty & wisdom to be found in w… https://t.co/MYnkKJxcrx
2 days 6 hours ago
Join WSU President M. Roy Wilson for a book talk next Wednesday! Copies of his memoir will be available for sale a… https://t.co/6q5w5dtFtu
4 days 6 hours ago
TONIGHT! Join @stephanie_heit at @ShopBooksweet for local author's night! https://t.co/pTny5OErDe