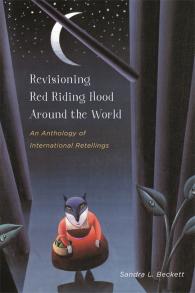 An Anthology of International Retellings

Across various time periods, audiences, aesthetics, and cultural landscapes, Little Red Riding Hood is a universal icon, and her story is one of the world's most retold tales. In Revisioning Red Riding Hood Around the World: An Anthology of International Retellings, Sandra L. Beckett presents over fifty notable modern retellings, only two of which have appeared previously in English. The tales include works published in twenty-four countries and sixteen languages, in texts that span more than a century, but with the majority written in the last fifty years. They include retellings for children, adolescents, and adults, as well as crossover works intended for an audience of all ages.

The tales in this volume progress from works that recast the story of Little Red Riding Hood from traditional perspectives through more playful versions to more unconventional approaches. Seven sections are arranged thematically: Cautionary Tales for Modern Riding Hoods, Contemporary Riding Hoods Come of Age, Playing with the Story of Red Riding Hood and the Wolf, Rehabilitating the Wolf, The Wolf's Story, The Wolf Within, and Running with the Wolves. Beckett provides an interpretative introduction to each text and insightful information on its author and/or illustrator. A variety of genres are represented, including fairy tale, short story, novella, novel, poetry, illustrated books, and picture books. More than 90 illustrations, both color plates and black-and-white images, reveal further narrative layers of meaning.

The number and diversity of retellings in Revisioning Red Riding Hood demonstrate the tale's remarkable versatility and its exceptional status in the collective unconscious and in literary culture, even beyond the confines of the Western world. This unique anthology contributes to cross-cultural exchange and facilitates comparative study of the tale for readers interested in fairy-tale studies, cultural studies, and literary history.

Sandra L. Beckett is professor of French at Brock University. She is the author of Red Riding Hood for All Ages: A Fairy-Tale Icon in Cross-Cultural Contexts (Wayne State University Press, 2008), Crossover Picturebooks: A Genre for All Ages, Crossover Fiction: Global and Historical Perspectives, Recycling Red Riding Hood, and De grands romanciers écrivent pour les enfants, among others. She has also edited several books, including Beyond Babar: The European Tradition in Children's Literature, Transcending Boundaries: Writing for a Dual Audience of Children and Adults, and Reflections of Change: Children's Literature Since 1945.

Beckett, author of two previous books on Little Red, has performed a stunning feat of scholarship. . . Wayne State University Press is to be applauded for the investment in this beautiful volume at a time when so many presses are stinting on production.

Each retelling is accompanied by an introduction to the author, an overview of some of their other works, their place in the international canon, along with a more scholarly examination of the specific tale. The result is an academic exercise that fulfills two significant purposes: it offers a critical lens through which to view the stories, and it provides an opportunity to engage with international works that a U.S. audience might otherwise not see. This has obvious value to children’s literature and folktale scholars, but the stories might also make for excellent storytelling fodder.

Revisioning Red Riding Hood around the World places Red in the context of history, showing her at times as an independent young woman with fight, and at other times, as in Ikhlef’s narrative, a seductress who feeds off the Wolf’s temptation. For all the variations North America has read in books or seen on the screen, Beckett’s text offers a unique and new view of the scope of Red’s appeal in recent history. For those who share Beckett’s "passion for the little girl in red," Revisioning Red Riding Hood around the World provides further documentation and appreciation for a worldwide literary icon.

– Lori A. May, The Los Angeles Review

It is a valuable contribution to the ongoing fascination with 'Little Red Riding Hood' of readers of all ages and nationalities.

After two books in which Sandra Beckett introduced and analyzed dozens of Red Riding Hoods for her readers, she now provides us with the actual material that was the basis of her fascinating research. The result is a wealth of stories that are very diverse in content, origin, and style. What a treasure trove for researchers, what an eye-opener for students, and what a joy to read for all those interested in fairy tales, children's literature, and world literature.

In Revisioning Red Riding Hood around the World, Sandra Beckett presents 52 versions of the tale of Little Red Riding Hood in English translations from 15 other languages, representing authors,
illustrators, and publishers from a globetrotter’s list of countries...

If you are a fan and/or student of Little Red Riding Hood, Revisioning Red Riding Hood Around the World: An Anthology of International Retellings is a must add to your library. It's excellent. There are versions of LRRH--old and new--found within that I was not familiar with and so I'm sure there will be new ones to you, too.