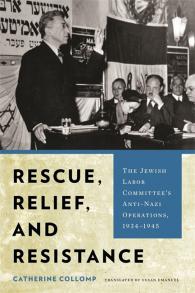 Rescue, Relief, and Resistance: The Jewish Labor Committee's Anti-Nazi Operations, 1934–1945 is the English translation of Catherine Collomp’s award-winning book on the Jewish Labor Committee (JLC). Formed in New York City in 1934 by the leaders of the Jewish Labor Movement, the JLC came to the forefront of American labor’s reaction to Nazism and antisemitism. Situated at the crossroads of several fields of inquiry—Jewish history, immigration and exile studies, American and international labor history, World War II in France and in Poland—the history of the JLC is by nature transnational. It brings to the fore the strength of ties between the Yiddish-speaking Jewish worlds across the globe.

Rescue, Relief, and Resistance contains six chapters. Chapter 1 describes the political origin of the JLC, whose founders had been Bundist militants in the Russian empire before their emigration to the United States, and asserts its roots in the American Jewish Labor movement of the 1930s. Chapters 2 and 3 discuss how the JLC established formal links with the European non-communist labor movement, especially through the Labor and Socialist International and the International Federation of Trade Unions. Chapter 4 focuses on the approximately 1,500 European labor and socialist leaders and left-wing intellectuals, including their families, rescued from certain arrest and deportation by the Gestapo. Chapter 5 deals with the special relationship the JLC established with currents in the Resistance in France, partly financing its underground labor and socialist networks and operations. Chapter 6 is devoted to the JLC’s support of Jews in Poland during the war: humanitarian relief for those in the occupied territory under Soviet domination and political and financial support of the combatants of the Warsaw ghetto in their last stand against annihilation by the Wermacht.

The JLC has never commemorated its rescue operations and other political activities on behalf of opponents of fascism and Nazism, nor its contributions to the reconstruction of Jewish life after the Holocaust. Historians to this day have not traced its history in a substantial way. Students and scholars of Holocaust and American studies will find this text vital to their continued studies.

Catherine Collomp, emerita professor of American history at Université de Paris, is a French researcher in the fields of labor and immigration history. She is also the author of Entre classe et nation, Mouvement ouvrier et Immigration aux Etats-Unis, 1880–1920 and the editor of An American in Hitler’s Berlin: Abraham Plotkin’s Diary, 1932–1933.

Catherine Collomp’s comprehensive study tells the important story of the Jewish Labor Committee’s rescue activities during and after World War II that have heretofore not been paid much attention. Grounded in extensive research in archives in the United States and France, this book pays tribute to the incredible efforts of individuals to save Jews from Nazi-occupied territories which so far had remained unheralded.

– David Slucki, author of The International Jewish Labor Bund after 1945: Toward a Global History and Sing This at My Funeral: A Memoir of Fathers and Sons (Wayne State University Press, 2019)

This is an important book. It calls attention to the role of the American Labor movement in alerting the United States to the Nazi danger early on, and in making significant efforts to save Jews and labor leaders trapped in Europe by the Nazi military successes in 1940. As such it is both a valuable addition to our understanding of the role of Labor in fighting fascism and saving lives, and it is a significant corrective to interpretations which neglect the role of labor, and political struggles over preserving democracy in the battles against the threats of antisemitism and the attack on freedom. It extends the argument as well to conflicts within the labor movement over the Bolshevik repression of labor leaders. This book is worth the translation from French and will interest a wide American audience.

Collomp’s work on the early decades of the Jewish Labor Committee, an important and understudied topic, is both well researched and highly readable. Containing substantial amounts of new information on many fascinating subjects and filling a major gap in existing scholarly literature, this book deserves to reach a wide audience.

Catherine Collomp’s study is an amazing work of scholarship based on extensive archival research. Fascinating to read, it recognizes the heroic contributions of the Jewish Labor Committee to the struggle against Nazism. Impressive in every respect, it reveals the efforts of many unsung heroes, and should be regarded as an essential Holocaust source.

A much too easily embraced claim about American Jewish behavior during the Nazi era offers that American Jews did little and abandoned their brethren in Europe. Catherine Collomp’s well-researched study of a segment of American Jewry, Jewish labor—specifically the Jewish Labor Committee and its constituent unions and organizations—capably tells a different story. The JLC actively opposed the rise of Nazism and supported American engagement in the war. The JLC acted early in the war to save leading Jewish intellectuals. artists, and labor leaders in occupied France, and later, worked with the European undergrounds, engaged in actions aimed at rescue, which helped save Jewish children in France and provided relief to a surviving remnant of Jews in Poland.

Collomp (emer., Univ. of Paris, France) has written the definitive history of the New York–based Jewish Labor
Committee’s resistance activities in the US and Europe from 1934 to 1945. She draws on archival material from two
continents and written in multiple languages to weave a complicated story in which both prominent and obscure figures
worked feverishly to save the victims of Nazism.