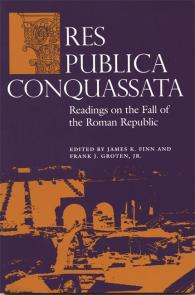 Readings on the Fall of the Roman Republic

This treasure trove is made easily accessible by the notes and glossary incorporated in the text.

Containing readings from eyewitness accounts of the collapse of the Roman republic, Res Publica Conquassata (The Republic Shattered) relates Julius Caesar's invasion of his own fatherland at the head of a loyal and seasoned army. The correspondence of the great orator Marcus Cicero, one of Caesar's most prominent political adversaries, is interspersed among Caesar's narrative episodes of the civil war (De Bello Civili). James K. Finn and Frank J. Groten, Jr. provide critical commentary on the Latin text giving depth to the readings, as well as placing the writings in historical context with a chronological table, short biographies of important persons of the time, a glossary of political terms, a map, and a full Latin-English vocabulary. The design of the whole work presents a self-contained edition intended for students of intermediate and advanced Latin.

James K. Finn is chair of the classics department at The Hill School in Pottstown, Pennslyvania.

Frank J. Groten, Jr. is an adjunct lecturer of classical langagues at Albright College, and taught classics at The Hill School for over thirty years.

The thirty-six different documents in fifty-five selections provide a rich quarry for historians, linguists, and cultural anthropologists. This treasure trove is made easily accessible by the notes and glossary incorporated in the text.