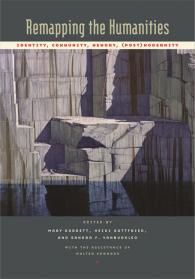 Edited by Mary Garrett, Heidi Gottfried, and Sandra F. VanBurkleo
with the assistance of Walter Edwards

“…The papers in this volume exemplify interdisciplinary research and collaboration, and therefore comprise a suitable commemoration of the Center's work during its first decade.”

Remapping the Humanities celebrates the tenth anniversary of the Wayne State University Humanities Center by bringing together essays that illustrate the richness of public conversations developed in interdisciplinary humanities centers. The contributors to this collection represent more than a dozen disciplines—including philosophy, English, political science, history, law, comparative literature, and Spanish—and, taken together, their essays illustrate an ongoing remapping of the intellectual landscape as scholars from across university departments engage one another in unpredictable ways.

This volume is divided into four thematic sections: Identity and Community, Remembering and Forgetting, Nationalism and Globalism, and Toward (Post)Modernity. Yet the essays deliberately represent a range of theoretical perspectives that interact synergistically, such as feminism and postcolonial studies, or literary criticism and art history. They also tackle topics as varied as the formation of the modern family in France and the inculcation of civic virtue in American cities, and they draw freely from different sources of evidence like newspaper accounts, popular literature, paintings, and diaries. Remapping the Humanities includes unique touches such as a portfolio of full-color images and an audio CD of Celtic-inspired jazz. In addition, a preface by Walter Edwards, academic director of the Humanities Center at Wayne State University, gives some background on this institution and the work being done there.

The importance of Remapping the Humanities ultimately lies in its refusal to say that learning has ended and the example it provides of the value of calculated ferment and intellectual instability. Educators involved with or wanting to learn more about interdisciplinary research will appreciate this unique collection.

Heidi Gottfried is associate professor of urban and labor studies and sociology at Wayne State University.

Making the first decade of the Wayne State University Humanities Center, this useful book celebrates the humanities centers of US higher education, which are dedicated to intensive interdisciplinary teaching and research."

Remapping the Humanities documents changing trajectories of scholarship among Wayne State University faculty, situating them within a wider set of cross-fertilizations reshaping the boundaries of disciplines and interdisciplinary fields. The contemporary understandings of history, culture, and language in this collection are remaking approaches to textuality, visuality, and aurality while expanding postmodern critical studies of identity, community, and gender."

The Humanities Center was established in 1993 to do nothing less than to revolutionize the thinking of Wayne State University humanists about the landscape, connections, scope, and worldview of humanistic disciplines... The papers in this volume exemplify interdisciplinary research and collaboration, and therefore comprise a suitable commemoration of the Center's work during its first decade.

23 hours 53 min ago
Today is #smallbusinesssaturday! Make a stop into your favorite local business or #indiebookstore, and get started… https://t.co/yddIwk9cIF
1 day 23 hours ago
Our holiday sale is officially here! Starting TODAY, take 30% off ALL BOOKS with code HOL2 at… https://t.co/s5Dp8iGvDg
3 days 16 hours ago
@upfromsumdirt We are very excited to work with you on this collection!