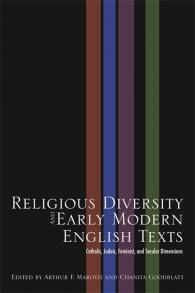 In Religious Diversity and Early Modern English Texts: Catholic, Judaic, Feminist, and Secular Dimensions, editors Arthur F. Marotti and Chanita Goodblatt present thirteen essays that examine the complex religious culture of early modern England. Emphasizing particularly the marginalized discourses of Catholicism and Judaism in mainstream English Protestant culture, the authors highlight the instability of an official religious order that was troubled not only by religious heterodoxy but also by feminist and secular challenges. North American and Israeli scholars present essays on a wide range of subjects all assumed to be "marginal" but which in a real sense were central to the religious and cultural life of the Protestant English nation.

Contributors show that we cannot understand a culture without attending to its repressed, marginalized, and unacknowledged elements. Scholars of religious, literary, and cultural history will enjoy this illuminating collection.

Arthur F. Marotti is distinguished professor emeritus of English at Wayne State University. He is the author of John Donne, Coterie Poet; Manuscript, Print, and the English Renaissance Lyric; and Religious Ideology and Cultural Fantasy: Catholic and Anti-Catholic Discourses in Early Modern England; he has edited or co-edited eight volumes of essays on early modern English literature and culture.

Chanita Goodblatt is associate professor of English and comparative literature at Ben-Gurion University of the Negev. She is the author of The Christian Hebraism of John Donne: Written with the Fingers of Man's Hand. She has co-edited a volume of essays on early modern European literature and culture, as well as a volume on early modern women writers and the new textualism. She has also co-authored a series of essays on cognitive poetics, including a monograph essay on I. A. Richards.

Despite the book's emphasis on diversity, all the essays in this volume have one thing in common: they are all firmly grounded in sound critical theory, yet non suffers from excessive theoretical jargon. In this regard, this text echoes one of the most traditional of religious paradoxes: there is unity in diversity.

This well-rounded and well-organized collection of essays, the eventual outgrowth of a 2005 conference, "Religious Cultures in the Early Modern Period," at Ben-Gurion University of the Negev, takes up the cause of three groups — Catholics, Jews, and women — who were once marginalized in normative Protestant accounts of early modern religious writing. To these three groups, whose critical fortunes have improved significantly over the past decades, the editors add a fourth group they call secularists, thereby evoking the most recent turn of the religious screw toward political theology and the emergence of the secular nation-state. . . . This volume remains valuable for its diversity of critical approaches and depth of scholarly insights.

This superb collection of essays makes it clear that Catholics, Jews, women, and religious skeptics can no longer be considered to have been on the margins of early modern English Protestantism, but must be treated as constituents of the plural nature of religion in the period.

This exciting collection brings together work on areas of early modern English religious culture too often considered marginal or of secondary importance. The book includes in its scope Catholicism, representations of Jews, and Hebraism, as well as studies of processes of secularization, gender and religion, and various formulations of agnosticism and unbelief. The range and high scholarly quality of its essays makes it essential reading for any scholar interested in the many relationships between religion and culture in the period.

Scholars generally now recognize the syncretized religious culture of early modern England and its equally hybrid expression in a variety of literary genres. This valuable collection of essays presents new avenues of investigation into this complex milieu and new topics for debate among students and commentators.

The chief purpose of this book is to restore a voice to those who, though on the margins of society, were far from voiceless or neglected, and this it does with originality and aplomb. It follows that this is a thought-provoking and important collection which should be of interest to any scholar concerned
with religion in early modern England.