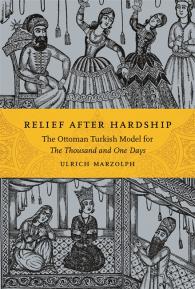 The Ottoman Turkish Model for The Thousand and One Days

The Thousand and One Days, a companion collection to The Thousand and One Nights, was published in 1710–1712 by French Orientalist scholar François Pétis de la Croix who advertised it as the faithful, albeit selective translation of a Persian work. Subsequent research has found that The Thousand and One Days is actually the adapted translation of a fifteenth-century anonymous Ottoman Turkish compilation titled Relief after Hardship. This compilation, in turn, is the enlarged translation of an equally anonymous Persian collection of tales that likely dates back to as early as the thirteenth century. The tales in both the Ottoman Turkish and the Persian collections are mostly tales of the marvelous and the strange, a genre that dominated much of the narrative literatures of the pre-modern Muslim world.

Ulrich Marzolph’s Relief after Hardship: The Ottoman Turkish Model for The Thousand and One Days is a detailed assessment of the Ottoman Turkish compilation and its Persian precursor. Based upon Andreas Tietze’s unpublished German translation of the Ottoman Turkish Ferec ba'd es-sidde, it traces the origins of the collection’s various tales in the pre-modern Persian and Arabic literatures and its impact on Middle Eastern and world tradition and folklore. Ottoman Turkish literature proves to be a suitable candidate for the transmission of tales from East to West long before the European translation of The Thousand and One Nights. Additionally, the concept of "relief after hardship" has the same basic structure as the European fairy tale, wherein the protagonist undergoes a series of trials and tribulations before he attains a betterment of his status. Marzolph contends that the early reception of these tales from Muslim narrative tradition might well have had an inspiring impact on the nascent genre of the European fairy tale that has come to know international success today.

This fascinating compilation of tales is being presented for the first time to an English language audience along with a comprehensive survey of its history, as well as detailed summaries and extensive comparative annotations to the tales that will be of interest to literature and folklore scholars.

Ulrich Marzolph is a professor of Islamic studies at the Georg-August University in Göttingen, Germany. Having served on the editorial board of the Enzyklopädie des Märchens (1986–2015), he is now conducting a research project studying the impact of narratives from the Muslim Middle East on Western tradition. He is the editor of The Arabian Nights Reader (Wayne State University Press, 2006) and The Arabian Nights in Transnational Perspective (Wayne State University Press, 2007).

No western scholar has contributed more to the study of the folk narrative of the Muslim world in the past thirty years than Ulrich Marzolph. His Relief after Hardship is an example of good judgment, sensitivity, and scholarly thoroughness that entertains and edifies at the same time.

Ulrich Marzolph offers an erudite study of the relationship between the Persian, Ottoman Turkish, and French versions of the classic story collection known as 1001 Days in the West. His research clearly demonstrates that the study of not easily accessible Middle Eastern folktales will continue to enrich and reformulate our knowledge about the European tale of magic.

– Helga Anetshofer, lecturer in Ottoman and Turkish, University of Chicago

At last, a scientific tool of remarkable precision for researchers who work on French Eastern tales of the eighteenth century. [This monograph provides] access to an Eastern source analyzed and placed in the great Arab, Turkish, and Persian narrative tradition.

The book is competently constructed, well bound, and presents a smart appearance for a reasonable price. Relief after Hardship will make a fine addition to the library of anyone with an interest in Near Eastern literature and narrative and is an essential purchase for those whose research engages specifically with the three textual traditions it explores. In the book’s preface, the author details how the project itself found its way to him from the late Hungarian scholar Györgi Hazai who took up the mantle from his late colleague, Austrian scholar Andreas Tietze. I can think of no more fitting eulogy to two distinguished scholars; there is no question that both men would be honored by the admirable manner in which Marzolph has treated the material.

This book, with its precious and detailed summaries of the Ferec’s twisty tales, its indices helping readers to locate motifs and parallels in the summaries, and several lists and tables comparing the contents of the most relevant tale collections, will serve as an essential and generous reference for further scholarship on this and many related narrative traditions.

Relief after Hardship represents just the beginning of Marzolph’s work on this important collection.

A fascinating glimpse into the trilingual literary field(s) of the Islamicate world centred in Istanbul in the seventeenth century . . . in many ways a liberating study.

Marzolph’s new book very convincingly shows the importance of the Ferec ba’d es-sidde collection in its own right and offers at the same time a glimpse into some of the debates pertaining to the literature of Middle Eastern Muslim folktales in general. Relief after Hardship is indeed an entertaining, though demanding, read. The tales’ summaries and comments constitute a lasting encyclopedia, which is a most welcome gift to the community of scholars, as well as the complete bibliography and indexes. This book, with a beautiful figurative illustration on the cover, is certainly destined to give an international audience a better understanding of the rich and varied folktale literature of the Muslim world.