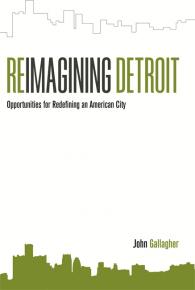 Opportunities for Redefining an American City

“This is a valuable book, not only for Detroiters, but for anyone with a physical, financial, or emotional stake in the future of America's shrinking industrial cities.

Experts estimate that perhaps forty square miles of Detroit are vacant-from a quarter to a third of the city -a level of emptiness that creates a landscape unlike any other big city. Author John Gallagher, who has covered urban redevelopment for the Detroit Free Press for two decades, spent a year researching what is going on in Detroit precisely because of its open space and the dire economic times we face. Instead of presenting another account of the city's decline, Reimagining Detroit: Opportunities for Redefining an American City showcases the innovative community-building work happening in the city and focuses on what else can be done to make Detroit leaner, greener, and more economically self-sufficient.

Gallagher conducted numerous interviews, visited community projects, and took many of the photographs that accompany the text to uncover some of the strategies that are being used, and could be used in the future, to make twenty-first century Detroit a more sustainable and desirable place to live. Some of the topics Gallagher discusses are urban agriculture, restoring vacant lots, reconfiguring Detroit's overbuilt road network, and reestablishing some of the city's original natural landscape. He also investigates new models for governing the city and fostering a more entrepreneurial economy to ensure a more stable political and economic future. Along the way, Gallagher introduces readers to innovative projects that are already under way in the city and proposes other models for possible solutions-from as far away as Dresden, Germany, and Seoul, South Korea, and as close to home as Philadelphia and Youngstown-to complement current efforts.

Ultimately, Gallagher helps to promote progressive ideas and the community leaders advancing them and offers guidance for other places dealing with the shrinking cities phenomenon. Readers interested in urban studies and environmental issues will enjoy the fresh perspective of Reimagining Detroit.

John Gallagher is a veteran journalist who writes about urban and economic development for the Detroit Free Press. He joined the newspaper in 1987. John's other books include Great Architecture of Michigan and, as co-author, AIA Detroit: The American Institute of Architects Guide to Detroit Architecture.

What is really distinctive about John Gallagher's contribution to the Detroit saga is his perspective. This important and timely book reflects his design/architectural background, business experience, and the investigative skills he honed at the Detroit Free Press. This rich background is badly needed, as much of the writing about the post-industrial urban future, including Detroit's, is narrow or opinionated or worse, both. Gallagher's book will not be the last to explore the journey that Detroit might take through the twenty-first century, but this road map will be essential reading for all."

– Robin Boyle, director of the Department of Urban Studies and Planning at Wayne State University

If the city had a suggestion box next to the 'Spirit of Detroit,' it would serve our interests to slip this slim volume through the slot.

John Gallagher, a local Detroit Free Press writer and champion for Detroit’s future helps paint a
more reasonable and healthy Detroit in the future if we take some steps now. Gallagher also wrote
"Revolution Detroit: Strategies for Urban Reinvention" which continues on with many of the ideas in his first book, while introducing some new ones. Anyone who considers themselves knowledgeable about Detroit should have these two books on their shelves. They are straightforward, insightful and most importantly easy to grasp.

John Gallagher's Reimagining Detroit provides a thought-provoking analysis of a city devastated by deindustrialization and a clear vision for a future Detroit as a smaller, vibrant city. This thinking goes against the grain as many public policy experts and planners believe that fixing Detroit requires a repopulation of the city's current footprint. Policy makers and community leaders should examine Gallagher's paradigm-shifting idea that when you plan for shrinkage, growth happens. Reimagining Detroit is a must-read for all engaged in the hard work of rebuilding Detroit."

John Gallagher has done a great job of synthesizing a host of important and emerging ideas that could dramatically change Detroit's future and of presenting them in ways that are clear and vivid and that both practitioners and laypeople will readily grasp. This is a valuable book, not only for Detroiters, but for anyone with a physical, financial, or emotional stake in the future of America's shrinking industrial cities."

– Alan Mallach, non-resident senior fellow in the Metropolitan Policy Program at the Brookings Institution and author of Bringing Buildings Back: From Vacant Properties to Community Assets

– Jay Williams, mayor of Youngstown, Ohio, from the foreword

This is a sobering account-a wakeup call, of sorts-that asks you to imagine a future in the midst of crisis. Written with footnotes for the academic reader and the author's own photography, Gallagher places Detroit in the context of other cities that are reinventing themselves; while shrinking, but growing through qualitative development."

John Gallagher has done a great job of synthesizing a host of important and emerging ideas that could dramatically change Detroit's future and of presenting them in ways that are clear and vivid and both practitioners and laypeople will readily grasp. This is a valuable book, not only for Detroiters, but for anyone with a physical, financial, or emotional stake in the future of America's shrinking industrial cities."

– Ends and Beginnings: The Newsletter of the MCHE