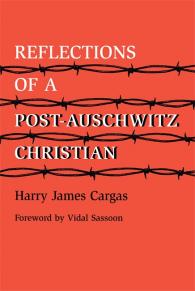 Reflections of a Post-Auschwitz Christian

Cargas ... has thought long and painfully about Christians' share of responsibility for the Holocaust, and this collection of his writings challenges the Catholic establishment to do the same.

For almost a quarter of a century, Harry James Cargas has been wrestling with the pain and bewilderment he feels about the Holocaust. In a series of essays, Cargas deals with a variety of issues and questions that the Holocaust raises and concludes that Christian churches must accept a major portion of the blame for centuries of Jewish persecution that led up to the massacres of World War II. Further, he criticizes the silence and even complicity of many Christians during the Holocaust.
The essays are wide-ranging, from the silence of the Vatican and Kurt Waldheim's visit to Pope John Paul II to the persecution of the gypsies and the canonization of Edith Stein. Along the way, Cargas arrives at disturbing conclusions and proposes specific actions for both the individuals and the institutional church.
Reflections of a Post-Auschwitz Christian challenges Christians to make the Holocaust a turning point in their thinking and in their relations with Jews.

Harry James Cargas is professor of literature and language at Webster University in St. Louis, Missouri. He is associate and founding editor of Holocaust and Genocide Studies and has published extensively on Christianity and the Holocaust.

In sixteen superbly crafted and brilliantly argued essays, Cargas demands of his fellow Christians that they face up to the full implications of the Holocaust as 'their greatest tragedy since the crucifixion of Jesus.

Harry Cargas embarks on an exploration of the failure of Christianity in the mid-twentieth century. A personal, moral statement addressing critical issues for Christians, particularly Roman Catholics, Reflections dares non-Jews to make the Holocaust a watershed event in their thinking about and relations with Jews: Cargas poses painful questions and draws difficult conclusions, proposing specific actions for both individuals and the institutional church [and] shedding light on the Holocaust from a Christian perspective while defining Christian-Jewish relations.

Cargas ... has thought long and painfully about Christians' share of responsibility for the Holocaust, and this collection of his writings challenges the Catholic establishment to do the same.

4 hours 19 min ago
Happy Pub Date to THE SPOOK WHO SAT BY THE DOOR, SECOND EDITION! This new edition of a literary classic now includ… https://t.co/XrCsLZvf4D
4 hours 23 min ago
RT @DarkProjections: Returned from a great two weeks in Europe to find copies of my new book! Kolchak:The Night Stalker, one of the Pion… https://t.co/kPJ5kKLRyr
1 day 1 hour ago
RT @oneitadetroit: Thrilled that @WSUPress is releasing the 2E of Sam Greenlee's "The Spook Who Sat by the Door" tomorrow. Introductio… https://t.co/hZpAjxluIl