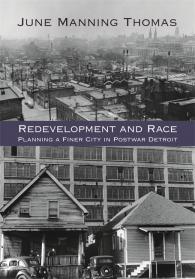 One of the important books in planning history, urban history, African-American history, and urban studies

In the decades following World War II, professional city planners in Detroit made a concerted effort to halt the city's physical and economic decline. Their successes included an award-winning master plan, a number of laudable redevelopment projects, and exemplary planning leadership in the city and the nation. Yet despite their efforts, Detroit was rapidly transforming into a notorious symbol of urban decay. In Redevelopment and Race: Planning a Finer City in Postwar Detroit, June Manning Thomas takes a look at what went wrong, demonstrating how and why government programs were ineffective and even destructive to community needs.

In confronting issues like housing shortages, blight in older areas, and changing economic conditions, Detroit's city planners worked during the urban renewal era without much consideration for low-income and African American residents, and their efforts to stabilize racially mixed neighborhoods faltered as well. Steady declines in industrial prowess and the constant decentralization of white residents counteracted planners' efforts to rebuild the city. Among the issues Thomas discusses in this volume are the harmful impacts of Detroit's highways, the mixed record of urban renewal projects like Lafayette Park, the effects of the 1967 riots on Detroit's ability to plan, the city-building strategies of Coleman Young (the city's first black mayor) and his mayoral successors, and the evolution of Detroit's federally designated Empowerment Zone. Examining the city she knew first as an undergraduate student at Michigan State University and later as a scholar and planner, Thomas ultimately argues for a different approach to traditional planning that places social justice, equity, and community ahead of purely physical and economic objectives.

Redevelopment and Race was originally published in 1997 and was given the Paul Davidoff Award from the Association of Collegiate Schools of Planning in 1999. Students and teachers of urban planning will be grateful for this re-release. A new postscript offers insights into changes since 1997.

June Manning Thomas is Centennial Professor of Urban and Regional Planning at the University of Michigan. She is also the co-editor of Urban Planning and the African American Community and co-editor of The City after Abandonment.

Unquestionably, Thomas (now a professor at the University of Michigan) makes a significant contribution to the literature. The book’s key contribution is its detailed examination of the relationship between race relations and urban planning efforts. Few historical case studies of urban redevelopment give so much attention to urban planners. The text is as relevant today as when it was originally published. However, it also offers an especially timely illustration of the potential dynamic interchange that can be fostered between urban planners and their respective communities. Thomas is especially adept at advocating for collaborative models of planning and partnership. The book is suitable for urban scholars, as well as planning practitioners or anyone with an interest in furthering social justice in our cities.

This is an extremely well-conceived and well-executed assessment of planning in Detroit from the 1940s through the early 1990s. It not only gives the reader a richly textured portrait of plannings rocky ride during this tumultuous era, but it also helps to explain why city leaders proved unable to halt the process of urban decline, even though there were so many resources thrown at the problem. This book can become one of the important books in planning history, urban history, African-American history, and urban studies.

This is the new paperback edition of a book originally published in ’97, Redevelopment and Race: Planning a Finer City in Postwar Detroit, and, as Thomas says in the new preface, the "book is as important today as it was when first published.". . . Thomas examines postwar development, and the 1949 urban renewal act, aimed at eliminating slums. She goes through the Coleman Young years, and takes a long, hard look at existing racial disunity. She’s frank and honest, but always hopeful. That’s really the approach that we should all take.

This is history at its best, showing how easy it is to keep following the profession's timeworn habits instead of assessing them on their merits. Thomas goes on to discuss the complex results of the federal 1949 housing act, the failure of 'conservation' programs to revive neighborhoods and stem white flight, the 1967 civil disturbances, and the legacy of Mayor Coleman Young. Her treatment of what in many ways is a terrible story remains unwaveringly thoughtful.

2 days 21 min ago
Now a National Jewish Book Award Finalist! @JewishBook https://t.co/qTKAeUEPVX
2 days 3 hours ago
RT @Steph_Steinberg: Tomorrow @ 7 p.m.! Join me and @DETWritingRoom at The Whitney for our first #2023AuthorSeries event ft. @waynestate… https://t.co/pssbi2NLNs
6 days 5 hours ago
SAVE THE DATE! Join author Desiree Cooper and illustrator Bec Sloane this Saturday for a behind the scenes look at… https://t.co/cKDBmbewOa