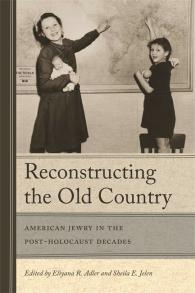 American Jewry in the Post-Holocaust Decades

The 1950s and early 1960s have not traditionally been viewed as a particularly creative era in American Jewish life. On the contrary, these years have been painted as a period of inactivity and Americanization. As if exhausted by the traumas of World War II, the American Jewish community took a rest until suddenly reawakened by the 1967 Six-Day War and its implications for world Jewry. Recent scholarship, however, has demonstrated that previous assumptions about the early silence of American Jewry with regard to the Holocaust were exaggerated. And while historians have expanded their borders and definitions to encompass the postwar decades, scholars from other disciplines have been paying increasing attention to the unique literary, photographic, artistic, dramatic, political, and other cultural creations of this period and the ways in which they hearken back to not only the Holocaust itself but also to images of prewar Eastern Europe.

Reconstructing the Old Country: American Jewry in the Post-Holocaust Decades brings together scholars of literature, art, history, ethnography, and related fields to examine how the American Jewish community in the post-Holocaust era was shaped by its encounter with literary relics, living refugees, and other cultural productions which grew out of an encounter with Eastern European Jewish life from the pre-Holocaust era. In particular, editors Eliyana R. Adler and Sheila E. Jelen are interested in three different narratives and their occasional intersections. The first narrative is the real, hands-on interaction between American Jews and European Jewish refugees and how the two groups influenced one another. Second were the imaginative reconstructions of a wartime or prewar Jewish world to meet the needs of a postwar American Jewish audience. Third is the narrative in which the Holocaust was mobilized to justify postwar political and philanthropic activism.

Reconstructing the Old Country will contribute to the growing scholarly conversation about the postwar years in a variety of fields. Scholars and students of American Jewish history and literature in particular will appreciate this internationally focused scholarship on the continuing reverberations of the Second World War and the Holocaust.

Eliyana R. Adler is an associate professor of history and Jewish studies at the Pennsylvania State University. She specializes in modern Eastern European Jewish history with an emphasis on gender, education, religion, and migration. Her publications include In Her Hands: The Education of Jewish Girls in Tsarist Russia (Wayne State University Press, 2011) and Jewish Literature and History: An Interdisciplinary Conversation, co-edited with Sheila Jelen.

Sheila E. Jelen is an associate professor of English, comparative literature, and Jewish studies at the University of Maryland, College Park. She specializes in modern Jewish literature and culture with an emphasis on gender, the literature of the Holocaust, and Hebrew and American-Jewish literature. Her publications include Intimations of Difference: Dvora Baron in the Modern Hebrew Renaissance and Modern Jewish Literatures: Intersections and Boundaries, co-edited with Michael Kramer and Scott Lerner.

Reconstructing the Old Country, a collection of essays written by historians, literary critics, and ethnographers, provides an extraordinarily interesting and nuanced analysis of how American Jews encountered Holocaust survivors and imagined the East European Jewish past in the years after World War II. Revealing the significant extent to which American Jews did indeed engage with the the tragedy of the Holocaust, came to terms with Holocaust survivors, and reimagined the now-dead Eastern European Jewish world, editors Eliyana Adler and Sheila Jelen have made an extremely important contribution to the scholarship on American Jewish history and literature in this period and demonstrated the fruitful results of interdisciplinary engagement.

This path-breaking and moving volume examines how American Jewry, now the largest Jewish community in the world, reacted in the postwar years to the decimation of East European Jewry in the Holocaust. It investigates how American Jews absorbed the influx of East European survivors, commemorated the destruction of what had been for many centuries one of the main centers of Jewish life, and sought to intervene to defend the still-existing Jewish communities in the area. It is essential reading for all students of modern Jewish history and of the postwar world.

– Antony Polonsky, emeritus professor of Holocaust studies, Brandeis University and chief historian at the Museum of Polish Jews in Warsaw

Adler and Jelen have edited an engaging volume that scholars in many fields will find useful. More significantly, they have offered us an excellent model of collaborative work and, not least, have shown us what the old country signified for postwar American Jews.

8 min 13 sec ago
TONIGHT! Join @stephanie_heit at @ShopBooksweet for local author's night! https://t.co/pTny5OErDe
21 hours 51 min ago
Have you had a chance to check out our new Spring & Summer 2023 Catalog?! From a new lyric essay collection to a p… https://t.co/cNAo9WjL9K
1 day 20 hours ago
RT @shondabuchanan: Tonight! Feb. 1, 2023, 6:30pm Mountain Time -- Virtual reading for #lewisandclarklibrary Lewis & Clark Library in H… https://t.co/UAmMoIlq1w