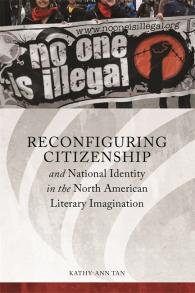 Literature has always played a central role in creating and disseminating culturally specific notions of citizenship, nationhood, and belonging. In Reconfiguring Citizenship and National Identity in the North American Literary Imagination, author Kathy-Ann Tan investigates metaphors, configurations, parameters, and articulations of U.S. and Canadian citizenship that are enacted, renegotiated, and revised in modern literary texts, particularly during periods of emergence and crisis.

Tan brings together for the first time a selection of canonical and lesser-known U.S. and Canadian writings for critical consideration. She begins by exploring literary depiction of "willful" or "wayward" citizens and those with precarious bodies that are viewed as threatening, undesirable, unacceptable—including refugees and asylum seekers, undocumented migrants, deportees, and stateless people. She also considers the rights to citizenship and political membership claimed by queer bodies and an examination of "new" and alternative forms of citizenship, such as denizenship, urban citizenship, diasporic citizenship, and Indigenous citizenship. With case studies based on works by a diverse collection of authors—including Nathaniel Hawthorne, Djuna Barnes, Etel Adnan, Sarah Schulman, Walt Whitman, Gail Scott, and Philip Roth—Tan uncovers alternative forms of collectivity, community, and nation across a broad range of perspectives.

In line with recent cross-disciplinary explorations in the field, Reconfiguring Citizenship and National Identity in the North American Literary Imagination shows citizenship as less of a fixed or static legal entity and more as a set of symbolic and cultural practices. Scholars of literary studies, cultural studies, and citizenship studies will be grateful for Tan’s illuminating study.

Kathy-Ann Tan is associate professor of American studies at the Eberhard Karls University of Tuebingen, Germany.

In social sciences, if we have come to expect to see citizenship performed by wayward, precarious, queer, transient, Indigenous, colonial—or, in short, subaltern—subjects as a constitutive element of citizenship, Kathy-Ann Tan vividly illustrates in this book that it is about time social sciences meet humanities. She finds a lively archive in American and Canadian literary imaginations where such subaltern subjects take the center stage in performing citizenship in creative, autonomous, and subversive ways. In tracing the development of citizenship performed in literature from established subjects to alternative subjects, she makes a quintessential contribution and opens up a massive archive in literature from which to reimagine the political subject.

Bringing literature to bear on the ambiguity of citizenship opens up new vectors for positioning membership. An extraordinary book that can add to a social scientist’s understanding of the subject.

– Saskia Sassen, Robert S. Lynd professor of Sociology at Columbia University and author of Expulsions: Brutality and Complexity in the Global Economy

The value of this book lies in the wide range of areas covered which go beyond the established canon of postcolonial literature. The new angle and approach are precisely in Kathy-Ann Tan’s attempt to advance the transformation of existing nations by incorporating ‘citizens" whose persuasions are still considered different and marginal. The inclusion of Philip Roth and the dialogue with queer and Indigenous studies is quite unusual and insightful. I know of no book that is based on such an original combination of work.