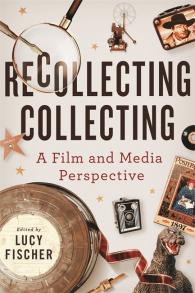 A Film and Media Perspective

– Timothy Corrigan, professor emeritus of cinema and media studies, University of Pennsylvania, and author of The Essay Film: From Montaigne, After Marker

In addition to its erudition and scholarly value, Recollecting Collecting will produce sighs of pure pleasure among readers who have always viewed their assorted and cherished treasures as a tangible means of connection with the past, real or imagined. In fact, the only thing ‘wrong’ with this volume is that I am not in it.

– Adrienne L. McLean,, author of All for Beauty: Makeup and Hairdressing in Hollywood’s Studio Era and Being Rita Hayworth: Labor, Identity, and Hollywood Stardom

This is a wonderful ‘collection’ of essays devoted to a subject many readers can
relate to but perhaps have not quite come to terms with. For any scholar there is surely an
element of autobiography in the reading of this engaging, important, and wonderfully accessible
collection. Indeed, the first-person narratives are fascinating whether one knows the writers
personally or not at all. One wants often to say, ‘that’s interesting!’ or ‘me, too!’ and the deft
integration of theoretical underpinning or scholarly revelations only makes this sharper, clearer,
and more inviting. It is surprising that there has been no significant work on personal collecting
by film and media scholars. Thus, Lucy Fischer, one of the true pioneers in the field, has done it
again, offering up a book that, somehow, we didn’t realize but now insist that we absolutely
need.

In Recollecting Collecting, Lucy Fisher gathers an eclectic selection of scholars who cannily explore the ways affective attachment to material objects can contribute to the widening of film and media research. Engaging Black cinema collectibles, Hollywood fan magazines, TV-inspired fashion, and comic books, among other artifacts, this timely anthology urges a nuanced questioning of the roles ownership, access, and power have accrued in the writing of media historiographies. By dwelling on the intersection of fandom and scholarship, this collection of essays further prompts an important reconsidering of what emerges when a scholar falls in love with their primary sources.

2 days 10 min ago
Now a National Jewish Book Award Finalist! @JewishBook https://t.co/qTKAeUEPVX
2 days 3 hours ago
RT @Steph_Steinberg: Tomorrow @ 7 p.m.! Join me and @DETWritingRoom at The Whitney for our first #2023AuthorSeries event ft. @waynestate… https://t.co/pssbi2NLNs
6 days 5 hours ago
SAVE THE DATE! Join author Desiree Cooper and illustrator Bec Sloane this Saturday for a behind the scenes look at… https://t.co/cKDBmbewOa