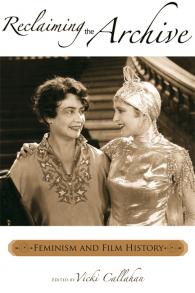 Reclaiming the Archive will convince a new generation of scholars of the continuing importance of feminist film studies.

Essays in Reclaiming the Archive investigate the different models available in feminist film history and how those feminist strategies might serve as paradigmatic for other sites of feminist intervention. Chapters have an international focus and range chronologically from early cinema to post-feminist texts, organized around the key areas of reception, stars, and authorship. A final section examines the very definitions of feminism (post-feminism), cinema (transmedia), and archives (virtual and online) in place today.

The essays in Reclaiming the Archive prove that a significant heritage of film studies lies in the study of feminism in film and feminist film theory. Scholars of film history and feminist studies will appreciate the breadth of work in this volume.

Vicki Callahan is associate professor at the Peck School of the Arts at the University of Wisconsin-Milwaukee and visiting faculty at the Institute for Multimedia Literacy at the University of Southern California. She is the author of Zones of Anxiety: Movement, Musidora, and the Crime Serials of Louis Feuillade (Wayne State University Press, 2004).

Reclaiming the Archive succeeds in making visible and valuable many themes, films, and individuals that have been
erased or discounted. This volume should become indispensible for equipping future scholars theoretically and methodologically and for offering them a richer archive integral to a new film history.

Reclaiming the Archive is an ambitious and comprehensive work.

Reclaiming the Archive is a landmark book that does a great deal to unify the large and disparate set of investigations in film history and feminist theory. This rich collection of cross-generational scholarship well reflects the diversity of questions and approaches that characterize feminist film studies."

If you want to understand what feminism and feminist theory mean for film studies today, then Reclaiming the Archive is the book for you. This exciting collection explores how feminist film studies have defined and redefined the basic tenets of both film theory and film history, offering fresh perspectives on the various ways in which the cinema writes history."

Reclaiming the Archive provides a useful snapshot of the myriad topics and methods of feminist film studies today. Demonstrating the importance and the variety of archival research occurring in the field, this unusually inclusive anthology addresses a wide range of agents and eras, from female screenwriters working in the silent era, to discourses of nostalgia in American romantic comedy to contemporary multimedia artists. Callahan's introductions to the sections, which include material on feminist reception history, authorship, early cinema, and the post-feminist future, provide useful summaries of the central issues in feminist film studies."

– Kelley Conway, associate professor of film at University of Wisconsin-Madison

Callahan and her contributors have established a strong sense of unity by so thoroughly intertwining the considerations of gender, sexuality, class, race and ethnicity. I am also confident that their attempt at 'presentifying' the field (p. 2) will pay off, and that Reclaiming the Archive will convince a new generation of scholars of the continuing importance of feminist film studies.

Reclaiming the Archive contains essays by some of the major feminist critics of our era, such as Laura Mulvey, Annette Kuhn, Sumiko Higashi, and Shelley Stamp, as well as work by scholars known, in addition, for other types of research, like Janet Staiger."

– Lucy Fischer, professor of English and film studies at the University of Pittsburgh

Reclaiming the Archive succeeds in making visible and valuable many themes, films, and individuals that have been erased or discounted. This volume should become indispensable for equipping future scholars theoretically and methodologically and for offering them a richer archive integral to a new film history.