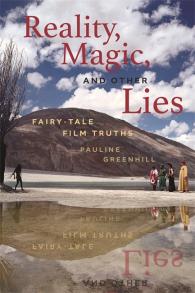 Reality, Magic, and Other Lies

Reality, Magic, and Other Lies: Fairy-Tale Film Truths explores connections and discontinuities between lies and truths in fairy-tale films to directly address the current politics of fairy tale and reality. Since the Enlightenment, notions of magic and wonder have been relegated to the realm of the fanciful, with science and reality understood as objective and true. But the skepticism associated with postmodern thought and critiques from diverse perspectives—including but not limited to anti-racist, decolonial, disability, and feminist theorizing—renders this binary distinction questionable. Further, the precise content of magic and science has shifted through history and across location. Pauline Greenhill offers the idea that fairy tales, particularly through the medium of film, often address those distinctions by making magic real and reality magical.

Reality, Magic, and Other Lies consists of an introduction, two sections, and a conclusion, with the first section, "Studio, Director, and Writer Oeuvres," addressing how fairy-tale films engage with and challenge scientific or factual approaches to truth and reality, drawing on films from the stop-motion animation company LAIKA, the independent filmmaker Tarsem, and the storyteller and writer Fred Pellerin. The second section, "Themes and Issues from Three Fairy Tales," shows fairy-tale film magic exploring real-life issues and experiences using the stories of "Hansel and Gretel," "The Juniper Tree," and "Cinderella." The concluding section, "Moving Forward?" suggests that the key to facing the reality of contemporary issues is to invest in fairy tales as a guide, rather than a means of escape, by gathering your community and never forgetting to believe.

Reality, Magic, and Other Lies—which will be of interest to film and fairy-tale scholars and students—considers the ways in which fairy tales in their mediated forms deconstruct the world and offer alternative views for peaceful, appropriate, just, and intersectionally multifaceted encounters with humans, non-human animals, and the rest of the environment.

Pauline Greenhill is professor of women’s and gender studies at the University of Winnipeg, Manitoba, Canada. Her most recent books are Clever Maids, Fearless Jacks, and a Cat: Fairy Tales from a Living Oral Tradition (with Anita Best and Martin Lovelace) and The Routledge Companion to Media and Fairy-Tale Studies (with Jill Terry Rudy, Naomi Hamer, and Lauren Bosc). Her fairy-tale research has been published in Feral Feminisms; Law, Culture, and the Humanities; Marvels & Tales; Narrative Culture; Studies in European Cinema; and Theoretical Criminology, among others.

Reality, Magic, and Other Lies is a comprehensive, sophisticated study of how fairy-tale and fantasy films contain more truth than so-called conventional realistic films. But this is not Greenhill’s only accomplishment. She is a thoughtful and astute critic who pierces many false notions about magic and wonder, and on the basis of numerous, largely independent fairy-tale films, she demonstrates that their alternative worlds offer hope that we can change the depraved conditions of our present reality. Her book is, indeed, marvelous and opens our eyes to the power of fantasy in all its forms and aspects.

– Jack Zipes, author of The Enchanted Screen: The Unknown History of the Fairy-Tale Film

Greenhill’s brilliant close readings invite us to reflect anew on how some fairy-tale media unsettle expectations of reality, truth, wonder, magic, or science; how fairy-tale films do not always take the shape of fantasy; and how, by making "the impossible thinkable," fairy tales on screen can provide visual and narrative alternatives for imagining our bodies, communities, and futures. A must-read not only in fairy-tale studies but in film and media studies as well as in studies of the fantastic, Reality, Magic, and Other Lies: Fairy-Tale Film Truths promises to spark lively discussion within and across these fields.

Greenhill’s lively and accessible book provides a pioneering venture into the wonders and truths of fairy-tale cinema. It is an excellent piece of scholarship. Precise interrogation of the films is skillfully matched with a dexterous discussion of broader, overarching themes. I am sure it will quickly become the definitive text in its field.

An excellent source of subject readings or reference material for a modern fairy tale or folklore course or researcher.

In addition to addressing head-on the crucial concepts of fairy-tale facts and magic, this book brings more direct attention to intersectionality and fairy-tale media than other works so far, along with fresh insights on queer and feminist approaches.

Citing a veritable plethora of film, folklore, culture, race, gender, and other theorists, Pauline Greenhill’s Reality, Magic and Other Lies: Fairy Tale Film Truths does critical and culturally important work in the guise of fairy-tale film analysis. In six, theoretically dense chapters, she lays out the case for taking fairy tales seriously, not as objective truth but as a way to "deconstruct the world and sometimes offer alternative views for peaceful, appropriate, intersectionally multifaceted encounters with humans, nonhuman animals, and the rest of the environment".

– Teresa Cutler-Broyles, Journal of the Fantastic in the Arts

In this searching and honest study, Greenhill illuminates an important passage of cultural history in which the challenge to this ogre whose ‘many shapes and names all turn us pale’ has been powerfully made.