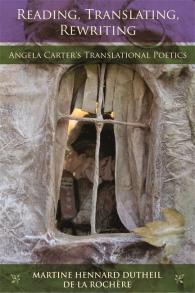 In translating Charles Perrault's seventeenth-century Histoires ou contes du temps passé, avec des Moralités into English, Angela Carter worked to modernize the language and message of the tales before rewriting many of them for her own famous collection of fairy tales for adults, The Bloody Chamber, published two years later. In Reading, Translating, Rewriting: Angela Carter's Translational Poetics, author Martine Hennard Dutheil de la Rochère delves into Carter's The Fairy Tales of Charles Perrault (1977) to illustrate that this translation project had a significant impact on Carter's own writing practice. Hennard combines close analyses of both texts with an attention to Carter's active role in the translation and composition process to explore this previously unstudied aspect of Carter's work. She further uncovers the role of female fairy-tale writers and folktales associated with the Grimms' Kinder- und Hausmärchen in the rewriting process, unlocking new doors to The Bloody Chamber.
Hennard begins by considering the editorial evolution of The Fairy Tales of Charles Perrault from 1977 to the present day, as Perrault's tales have been rediscovered and repurposed. In the chapters that follow, she examines specific linkages between Carter's Perrault translation and The Bloody Chamber, including targeted analysis of the stories of Red Riding Hood, Bluebeard, Puss-in-Boots, Beauty and the Beast, Sleeping Beauty, and Cinderella. Hennard demonstrates how, even before The Bloody Chamber, Carter intervened in the fairy-tale debate of the late 1970s by reclaiming Perrault for feminist readers when she discovered that the morals of his worldly tales lent themselves to her own materialist and feminist goals. Hennard argues that The Bloody Chamber can therefore be seen as the continuation of and counterpoint to The Fairy Tales of Charles Perrault, as it explores the potential of the familiar stories for alternative retellings.

While the critical consensus reads into Carter an imperative to subvert classic fairy tales, the book shows that Carter valued in Perrault a practical educator as well as a proto-folklorist and went on to respond to more hidden aspects of his texts in her rewritings. Reading, Translating, Rewriting is informative reading for students and teachers of fairy-tale studies and translation studies.

There is an extensive body of critical work on Angela Carter but her translations are rarely considered as part of her creative output, although the act of linguistic and cultural translation was central to Carter’s approach. This is a complex book using complex material: it analyses Carter’s English translation of Charles Perrault’s and Mme de Beaumont’s French fairy tales in The Fairy Tales of Charles Perrault (Carter 1977) and her rewriting of classic fairy tales in The Bloody Chamber (Carter 1979). Hennard Dutheil de la Rochère’s aim is not only to demonstrate that Carter’s work as a translator fundamentally shaped her understanding of the creative interplay of reading and writing, but also to demonstrate the connections and mutually reinforcing creative processes between writing, rewriting and translating in Carter’s output. She bases this on Carter’s intertextual understanding of the interconnectedness of literature, culture and the world, on the one hand, and the production of meaning as a process of translation engaged in by reader and writer on the other.

Reading, Translating, Rewriting: Angela Carter’s Translational Poetics "demonstrates how translation feeds Carter’s poetics on many levels, even extending beyond text into territories of intermedial and intersemiotic production. For Hennard the practice of translation is intertwined with creation, as it allies creative reading with creative writing. The word translation expands in meaning throughout her study, as she redeploys the term to propose fresh insights into Carter’s engagement with the fairy tale. The book provides an extensive introduction and first chapter that investigate the range of Carter’s reading and translation practices and examine Carter’s numerous "French connections," often integrating striking discoveries from the Angela Carter archive housed at the British Library. Hennard’s research attests to her extensive knowledge of the field of fairy-tale studies yet maintains an astonishing level of readability. The work is accessible to undergraduate and graduate students, while at the same time proposing observations that will interest the most experienced fairy-tale scholars.

The originality of Angela Carter’s writing has long fired the impassioned interest of scholars, readers, and fellow writers; but none of us grasped the crucial place that translation occupies in her oeuvre. Martine Hennard Dutheil’s magisterial, deeply worked, and inspired study re-orients Carter, showing how, through her hitherto marginalized work rendering Charles Perrault and Mme de Beaumont, she broke through to newfoundlands across barriers of genre, language, and medium. This critical study is an act of loving and painstaking illumination of one of the great writers of fairy tale, and a major contribution to the field of fairy-tale studies.

– Marina Warner, professor at the University of Essex and author of Stranger Magic

Carter has been the subject of many books and articles, particularly since her death in 1992. What sets Mme Hennard’s book apart from the crowd is her focus on Carter’s translations. She documents Carter’s movement from translation to new composition, with excellent references to contemporary translation theory and with a keen sense of the ways Carter transmutes her discoveries into something unexpected.

This study marks an important new intervention in Carter criticism. While The Bloody Chamber is one of Carter’s best-known works, and the fairy-tale revisionism contained within it the subject of wide critical debate, no sustained attention has been paid to how this work is indebted to Carter’s expertise as translator. Martine Hennard’s ‘contrapuntal’ reading of both The Bloody Chamber stories and Carter’s earlier translations of Perrault’s tales allows for a new assessment of both translated and ‘original’ texts, demonstrating that Carter’s engagement with the fairy-tale form was wide ranging, many faceted, and multilingual. Drawing on Carter’s essays and journals, Hennard not only makes a convincing argument for Perrault as a seminal influence on Carter’s writing but also for the importance of translation as a cornerstone of her artistic practice. Both scholarly and readable, this book opens up a new area of inquiry for Carter scholars and offers a new way of reading familiar texts.

– Sarah Gamble, reader in English and gender at Swansea University

Hennard’s perspective on translation goes far beyond the act of converting meaning from one language to another at a fixed point of time, but sees translation rather as a constant process of reading and re-reading, perceiving and representing. She discusses issues of ideologies alongside the process of translation, taking into consideration feminist criticism of fairy tales as sexist and showing Carter’s unique stance on gender issues in fairy tales. . . Reading, Translating, Rewriting: Angela Carter’s Translational Poetics will recharge studies on Angela Carter and make a very important contribution to the emerging field of literary-translation studies. For scholars and graduate students of literature and gender studies this book is a significant contribution.

In Reading, Translating, Rewriting: Angela Carter's Translational Poetics, author Martine Hennard Dutheil de la Rochère delves into Carter's The Fairy Tales of Charles Perrault (1977) to illustrate that this translation project had a significant impact on Carter's own writing practice. Hennard combines close analyses of both texts with an attention to Carter's active role in the translation and composition process to explore this previously unstudied aspect of Carter's work. She further uncovers the role of female fairy-tale writers and folktales associated with the Grimms' Kinder- und Hausmärchen in the rewriting process, unlocking new doors to The Bloody Chamber.

2 days 51 min ago
Now a National Jewish Book Award Finalist! @JewishBook https://t.co/qTKAeUEPVX
2 days 4 hours ago
RT @Steph_Steinberg: Tomorrow @ 7 p.m.! Join me and @DETWritingRoom at The Whitney for our first #2023AuthorSeries event ft. @waynestate… https://t.co/pssbi2NLNs
6 days 5 hours ago
SAVE THE DATE! Join author Desiree Cooper and illustrator Bec Sloane this Saturday for a behind the scenes look at… https://t.co/cKDBmbewOa