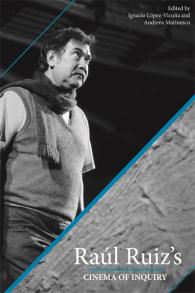 Most widely known for his filmic productions, Raúl Ruiz (1941–2011) was a highly prolific, erudite, and innovative artist, whose work is located at the intersection of diverse locations, languages, and aesthetic traditions. Ruiz’s eclectic body of work includes over one hundred films (among them features, shorts, television serials, and videos), books on the theory of cinema, genre-defying fiction books, plays, a radio show, and a multimedia installation. Raúl Ruiz’s Cinema of Inquiry posits the unity of Ruiz’s body of work and investigates the similarities between his very diverse artistic productions. Ruiz’s own concept of "cinema of inquiry" provides the lens through which his films and poetics are examined.

Ruiz’s relevance to cinema and the growing interest in his work are due to his legacy as a global filmmaker. Viewers, filmmakers, and film scholars continue to return to his works because his films consistently pose the question of what cinema can be, especially at a time when cinema is increasingly seen as displaced by television and new media. Ruiz expanded the domain of cinema itself, incessantly probing the interstices between cinema and other arts. Editors Ignacio López-Vicuña and Andreea Marinescu, with six other scholars, explore different aspects of Ruiz’s work, with special attention paid to the transnational aspects of Ruiz’s films, critical regionalism, and political and aesthetic interventions. Raúl Ruiz’s Cinema of Inquiry includes close readings of important yet understudied films, as well as two extensive previously unpublished interviews with Ruiz.

This comprehensive volume gives voice to a significant filmmaker and artist. Students and scholars of film and media studies will find great value in this collection.

Ignacio López-Vicuña is associate professor of Spanish at the University of Vermont. His areas of expertise include contemporary Latin American literature and cultural studies, representations of urban space, queer theory, and Latin American film. He has published articles on Southern Cone writers and filmmakers, including Roberto Bolaño and Raúl Ruiz. His work has appeared in such journals as Latin American Research Review, Studies in Hispanic Cinemas, and Journal of Latin American Cultural Studies.

Andreea Marinescu is associate professor of Spanish at Colorado College. Her primary areas of specialization are contemporary Latin American film, literature, and cultural studies, with particular interests in twentieth- and-twenty-first-century Southern Cone literature and film through the lens of literary and critical theory. She has published several articles on the relationship between politics and art in the works of Roberto Bolaño and Raúl Ruiz.

Raúl Ruiz and Roberto Bolaño are the two most important representatives of Latin American postmodernism. Both were Chilean (Bolaño from a younger generation than Ruiz), both shared the hopes of Allende’s Chilean Road to Socialism and the experience of its brutal destruction in 1973 by the military junta, both wrote from the permanent displacement of exile. Both developed their work on the ruins of the project of Latin American socialism, but also against the hegemony of the new reality principle imposed as much in the arts as in politics and economics by the dictatorships and globalization, neoliberalism. Their basic principle: Baroque proliferation negates neoliberal closure (or simply murder). Bolaño is well-known, Ruiz less so. But in recent years, interest in his vast oeuvre has picked up. This is an essential collection about an essential but still under appreciated figure in modern Latin American and world film.

– John Beverley, distinguished professor of Hispanic Languages and Literatures at the University of Pittsburgh and author of Latinamericanism after 9/11

By refracting the cinema of Raul Ruiz this book offers a rich set of ideas with which to approach his multifaceted, magnificent oeuvre. It represents an original contribution to Ruiz scholarship in English and challenges scholars to be daringly creative as his uniquely dense archive becomes increasingly accessible.

– Laleen Jayamanne, lecturer in cinema studies at the University of Sydney and author of The Epic Cinema of Kumar Shahani