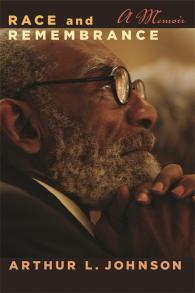 For the last fifty years in the area of civil rights nobody has approached Arthur L. Johnson's greatness in Detroit.

Race and Remembrance tells the remarkable life story of Arthur L. Johnson, a Detroit civil rights and community leader, educator, and administrator whose career spans much of the last century. In his own words, Johnson takes readers through the arc of his distinguished career, which includes his work with the Detroit branch of the NAACP, the Michigan Civil Rights Commission, and Wayne State University.

A Georgia native, Johnson graduated from Morehouse College and Atlanta University and moved north in 1950 to become executive secretary of the Detroit branch of the NAACP. Under his guidance, the Detroit chapter became one of the most active and vital in the United States. Despite his dedicated work toward political organization, Johnson also maintained a steadfast belief in education and served as the vice president of university relations and professor of educational sociology at Wayne State University for nearly a quarter of a century. In his intimate and engaging style, Johnson gives readers a look into his personal life, including his close relationship with his grandmother, his encounters with Morehouse classmate Martin Luther King Jr., and the loss of his sons.

Race and Remembrance offers an insider’s view into the social factors affecting the lives of African Americans in the twentieth century, making clear the enormous effort and personal sacrifice required in fighting racial discrimination and poverty in Detroit and beyond. Readers interested in African American social history and political organization will appreciate this unique and revealing volume.

Arthur L. Johnson is former director of the Detroit branch of the NAACP, former deputy director of the Michigan Civil Rights Commission, and former vice president of university relations at Wayne State University.

Arthur L. Johnson is one of the unsung heroes who created the new world of black and white America. For more than sixty years, he has given us a new sense of what creative, inclusive, and daring leadership can do. He came up from segregation, poverty, and a broken family and involved himself totally in a ministry of manhood, overcoming family tragedies and confronting a late bout of Parkinson's disease with his usual grace. You ought to know this man and his life story. He is one of the great yea-sayers and yea-makers of our times.

The African-American community lets too many of its important stories fade and die. Race and Remembrance is a significant contribution to our community's memory."

For the last fifty years in the area of civil rights nobody has approached Arthur L. Johnson's greatness in Detroit."

Arthur L. Johnson has promoted a spirit of cooperation that has helped calm the city and this is part of the reason the city has not been convulsed by civil disobedience for forty years. Arthur has a genuine love for people and the ability to be firm without being rude. Like Carl Sandburg said of Abraham Lincoln, Arthur is made of 'velvet and steel.' The velvet comes from love and the steel is his determination to tell what we need to know, even if the lessons are hard to hear."

Johnson's newly released book gives readers a look into his work as an activist since graduating from historic Morehouse College, where he attended along side civil rights leader the late Rev. Martin Luther King, Jr."

Race and Remembrance is a top pick for anyone who wants to read about the life of a civil rights warrior."

The thing that astounds me is how beloved Arthur L. Johnson is by everyone in the community, even though in the context of his professional life he has cajoled, encouraged, and even antagonized, in his own way, others to make the community a better place. That he is not cynical also amazes me. The dramatic experiences of tragedy and adversity in Race and Remembrance would warp others and make them feel bitter or hard-hearted. Johnson's conscience and sensitivity become a part of you and change you."

In the highly-anticipated memoir, Dr. Johnson offers an insider's view into the social factors affecting the lives of African Americans in the 20th century, making clear the enormous effort and personal sacrifice required in fighting racial discrimination and poverty in Detroit and beyond."

In Race and Remembrance by Arthur L. Johnson, the Detroit civil rights and community leader, educator and administrator gives readers an inside view of the struggle for civil rights, his encounters with Morehouse classmate Martin Luther King Jr., and the enormous effort and personal sacrifice required in fighting racial discriminations and poverty."

2 days 12 min ago
Now a National Jewish Book Award Finalist! @JewishBook https://t.co/qTKAeUEPVX
2 days 3 hours ago
RT @Steph_Steinberg: Tomorrow @ 7 p.m.! Join me and @DETWritingRoom at The Whitney for our first #2023AuthorSeries event ft. @waynestate… https://t.co/pssbi2NLNs
6 days 5 hours ago
SAVE THE DATE! Join author Desiree Cooper and illustrator Bec Sloane this Saturday for a behind the scenes look at… https://t.co/cKDBmbewOa