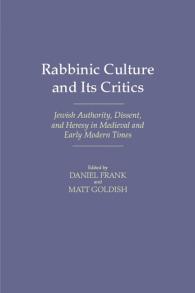 Rabbinic Culture and Its Critics

This fine compilation studies challenges to medieval and early modern rabbinic culture. The volume contains a number of eye-opening and thought-provoking essays that are worthy of further study.

The influential leaders, institutions, and texts that make up rabbinic culture have held a central place in Judaism since the Middle Ages and have given Jewish cultures across the world remarkably uniform systems of law and doctrines into the modern period. Even so, dissent from mainstream rabbinic culture always existed, prompted by matters such as textual interpretation, differences of authority, and definitions of spirituality. Rabbinic Culture and Its Critics exposes some of the views of these often-overlooked critics, sectarians, and so-called heretics as an important historical category in Jewish culture.

The book covers a wide span of time, from the days of the Babylonian Geonim, who first championed the Talmud in the early Middle Ages, to the period of the Maskilim, who promoted the Jewish Enlightenment in Europe during the eighteenth and nineteenth centuries. In their introductory essay, Daniel Frank and Matt Goldish define Rabbinic culture and survey the various types of critiques leveled against it. Subsequent essays consider different forms of dissent in detail, including the Andalusian tradition of belletristic satire, Moses Maimonides’ critical views of contemporary Jewish beliefs and practices, Karaite-Rabbanite polemics, the ambivalence toward rabbinic teachings among the communities of the Western Sephardi Diaspora, and the messianic movement surrounding Shabbatai Zvi.

The essays in Rabbinic Culture and Its Critics offer a fresh, interdisciplinary perspective on Jewish dissent within a traditional society that cuts across temporal, geographical, and phenomenological boundaries. The volume will provide informative reading for scholars of Jewish studies and anyone with an interest in religious history.

Daniel Frank is associate professor of Near Eastern languages and cultures at Ohio State University.

The essays are nearly all well written and some are exceptionally well crafted; all are erudite and based on meticulous scholarship. This volume offers detailed scholarship and subtle treatment of well-known themes and figures in Jewish history, making it clear that Jewish traditional culture in the premodern period was neither monolithic nor monochromatic, but pluralistic no less than it is today.

This wonderful volume lays to rest any notion of a monolithic Jewish culture in pre-modern times. From the fascinating yet meticulous essays by the leading scholars of their respective subjects, a varied and nuanced picture of Jewish cultural, religious, and intellectual history emerges. Each essay in this rich volume expands our knowledge of the beliefs and practices of medieval and early modern Jews. The volume includes Sefarad and Ashkenaz, rabbis and laypeople, Karaites, mystics, Sabbatians and rationalists. Woven together, they form a dazzling tapestry of the Jewish past and an indispensable resource."

– Elisheva Carlebach, professor of history at Queens College and the Graduate Center, CUNY

The Judaism of the rabbis has been predominant among Jews for almost 2000 years, yet it has not survived unchallenged. This superb collection of essays focuses on conflicts within rabbinic Judaism, as well as on alternate forms of Judaism, and can serve as a valuable introduction to pre-modern Jewish pluralism. The editors and the authors are to be congratulated."

This fine compilation studies challenges to medieval and early modern rabbinic culture. The volume contains a number of eye-opening and thought-provoking essays that are worthy of further study."

1 day 3 hours ago
Happy Pub Date to THE SPOOK WHO SAT BY THE DOOR, SECOND EDITION! This new edition of a literary classic now includ… https://t.co/XrCsLZvf4D
1 day 3 hours ago
RT @DarkProjections: Returned from a great two weeks in Europe to find copies of my new book! Kolchak:The Night Stalker, one of the Pion… https://t.co/kPJ5kKLRyr
2 days 24 min ago
RT @oneitadetroit: Thrilled that @WSUPress is releasing the 2E of Sam Greenlee's "The Spook Who Sat by the Door" tomorrow. Introductio… https://t.co/hZpAjxluIl