Home » Books » The Quotations of Mayor Coleman A. Young 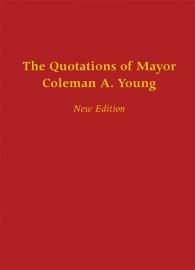 The Quotations of Mayor Coleman A. Young

The Quotations of Mayor Coleman A. Young is a fascinating, hilarious, and long-overdue compilation of his wit and wisdom. This book should be required reading for anyone interested in black power, political humor, and in the unique man who has provided both to the citizens of Detroit for almost twenty years.

This little red book brings together many of the longtime Detroit Mayor’s most unforgettable lines in a format meant to recall the famous little red book of quotations from Chairman Mao Tse-Tung. It was first published in 1991 by Droog Press, a small Detroit-based press founded by a long-time reporter and editor at the Detroit Free Press. This new edition features quotations that did not make it into the original book and a chronology outlining Coleman Young’s life and career. Both insightful and entertaining, this is an essential reference for anyone interested in politics, black politics in particular, and political humor.

Some quotes from Coleman A. Young:

"Swearing is an art form. You can express yourself much more exactly, much more succinctly, with properly used curse words."

"Racism is like high blood pressure—the person who has it doesn’t know he has it until he drops over with a goddamned stroke. There are no symptoms of racism. The victim of racism is in a much better position to tell you whether or not you’re a racist than you are."

"I issue a warning to all those pushers, to all rip-off artists, to all muggers: It’s time to leave Detroit; hit Eight Mile Road! And I don’t give a damn if they are black or white, or if they wear Superfly suits or blue uniforms with silver badges. Hit the road."

The Quotations of Mayor Coleman A. Young amasses an impressive array of one-liners and insults and poignant commentaries from Detroit's singular chief exec, spanning the nearly forty years between Young's bold testimony to Joe McCarthy's feared House Committee on Un-American Activities to his fifth term as Detroit's mayor."

The small, red-covered book resembles the collected thoughts of Chairman Mao. But history does not record that Mao ever called a political foe 'pruneface,' or a foreign leader 'a mean sucker.' Such wry and ribald utterances come from Detroit's Mayor Coleman Young . . . a barb-tongued Democrat whom metro Detroiters either love or love to lambaste. Through eighteen years in office, Young has left a trail of trademark sayings-from courageous to outrageous."

The Quotations of Mayor Coleman A. Young is a fascinating, hilarious, and long-overdue compilation of his wit and wisdom. This book should be required reading for anyone interested in black power, political humor, and in the unique man who has provided both to the citizens of Detroit for almost twenty years.

– Ze'ev Chafets, author of Devil’s Night and Other True Tales of Detroit