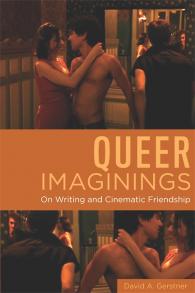 On Writing and Cinematic Friendship

How do we identify the "queer auteur" and their queer imaginings? Is it possible to account for such a figure when the very terms "queer" and "auteur" invoke aesthetic surprises and disorientations, disconcerting ironies and paradoxes, and biographical deceits and ambiguities? In eighteen eloquent chapters, David A. Gerstner traces a history of ideas that spotlight an ever-shifting terrain associated with auteur theory and, in particular, queer-auteur theory. Engaging with the likes of Oscar Wilde, Walter Benjamin, James Baldwin, Jean Louis Baudry, Linda Nochlin, Jane Gallop, Cáel Keegan, Luce Irigaray, and other prominent critical thinkers, Gerstner contemplates how the queer auteur in film theory might open us to the work of desire.

Queer Imaginings argues for a queer-auteur in which critical theory is reenabled to reconceptualize the auteur in relation to race, gender, sexuality, and desire. Gerstner succinctly defines the contours of a history and the ongoing discussions that situate queer and auteur theories in film studies. Ultimately, Queer Imaginings is a journey in shared pleasures in which writing for and about cinema makes way for unanticipated cinematic friendships.

In Queer Imaginings, David Gerstner offers a provocative meditation on the relationship between cinema, queerness, and the radical promise located at their intersection. Sweeping in his objects of study, Gerstner’s collected essays span time, place, and scholarly categorization to create a rich and multilayered vision of the possibilities for cinema and cinema studies. With an approach to both classic discourses and emerging queries in the arts that demonstrates a profound and moving level of care, Queer Imaginings is a stunning reminder of the love for their work that both artists and scholars share.

– Kyle Stevens, editor of The Oxford Handbook of Film Theory

Queer Imaginings takes up the question of the auteur and sheds new light on the overlapping processes of filmmaking and film writing. Gerstner expands our understanding of where the labor of cinema happens by foregrounding the economy of queer friendships—intimate exchanges built through conflict, ‘burgling,’ remembering, and generosity.

In this essential collection of writings by one of our foremost contemporary film theorists, the category of authorship finds itself both defended and queered: as écriture, as biography, and as a concept that connects the queerness of lived experience to the aesthetic deterritorializations of cinema. Tantalizing readings of Epstein, Eisenstein, Riggs, Minnelli, Honoré, and others are supplemented by a series of profound reflections on politics, aesthetics, and friendship, demonstrating that the project of queer film criticism and theory is one of film studies’ most crucial and enduring legacies.

There’s a stimulating exploration of queerness on the silver screen on offer here.