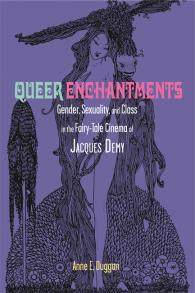 Gender, Sexuality, and Class in the Fairy-Tale Cinema of Jacques Demy

To the uninitiated, the films of French New Wave director Jacques Demy can seem strange and even laughable, with their gaudy color schemes and sung dialogue. Yet since the late 1990s, a generation of queer filmmakers in France have found new inspiration in Demy's cinema. In this volume, author Anne E. Duggan examines Jacques Demy's queer sensibility in connection with another understudied characteristic of his oeuvre: his recurrent use of the fairy tale. In Queer Enchantments: Gender, Sexuality, and Class in the Fairy-Tale Cinema of Jacques Demy, Duggan demonstrates that Demy uses fairy-tale devices to explore and expand the identity categories of his characters, while he broadens the possibilities of the genre of the fairy tale through his cinematic revisions.

In each chapter, Duggan examines how Demy strategically unfolds, challenges, and teases out the subversive qualities of fairy-tale paradigms. In chapter 1, Duggan reads Demy's Lola and The Umbrellas of Cherbourg through the lens of "Cinderella" and "Sleeping Beauty," while in chapter 2, she explores Demy's revision of Charles Perrault's "Donkey Skin" from the particular angle of gay aesthetics. In chapter 3, Duggan situates Demy's rendition of The Pied Piper in relation to a specifically Franco-American tradition of the legend, which thus far has not received critical attention. Finally, in Chapter 4, she examines the ways in which Demy's Lady Oscar represents the undoing of the figure of the maiden warrior. An epilogue reads Demy's fairy-tale cinema as exemplary of the postmodern tale.

Duggan shows that Demy's cinema heightens the inherent tensions and troubles that were already present in fairy-tale texts and uses them to illustrate both the constraints and utopian possibilities of the fairy tale. Both film and fairy-tale studies scholars will enjoy Duggan's fresh look at the distinctive cinema of Jacques Demy.

Anne E. Duggan is associate professor of French and director of the Gender, Sexuality, and Women's Studies program at Wayne State University. She is author of Salonnières, Fairies, and Furies: The Politics of Gender and Cultural Change in Absolutist France and associate editor of Marvels & Tales: Journal of Fairy-Tale Studies.

This book is a model of scholarship and comes highly recommended to anyone interested in Demy, the new wave, and its legacy, and the fairy- tale’s fascinating potential for subversion and questioning via an enchanted realm akin to cinema itself.

Existing at the intersection of film studies, fairy tale studies, and queer theory, Queer Enchantments will appeal to scholars from a variety of disciplines. Perhaps most excitingly, it is an important contribution to the growing body of literature engaged with fairy tales and queerness. Readable and compelling, Queer Enchantments models interdisciplinary scholarship at its best.

In this meticulously researched, persuasively argued book, Duggan invites her readers to take a fascinating journey deep into the world of fairy tales and the new wave cinema of Jacques Demy. . . Duggan makes it clear that fairy tales had a profound influence on Demy's aesthetics and that Demy's cinematic retellings of classic tales provide critical insight into the fairy-tale genre itself. Summing up: Highly recommended.

There's queer film theory, there's queer fairy-tale theory, now there's queer fairy-tale film theory! Experts in film studies and in fairy-tale studies who deal with fairy-tale cinema sometimes gripe about the other's lack of sophistication in their research subject. But in Queer Enchantments, Anne E. Duggan, well versed in both areas, provides an enjoyable and satisfyingly thorough reading of Jacques Demy's fairy-tale films and fairy-tale intertexts. Duggan follows distinguished theorists like the late Alexander Doty in going beyond director Demy's sexuality in her understanding of queer. Issues around camp, melodrama, desire, transgression, and social otherness inform Demy's queer screened texts and subtexts. The director's aesthetic, Duggan argues, is queered not only in representing sexual taboos like incest and impossibilities like the pregnant man, but because, like his distinguished forebear Jean Cocteau's filmic perspective, it questions the openings and limitations of the fairy tale's 'happily ever after.'

Careful and close reader of the French fairytale, Anne Duggan in Queer Enchantments engages an impassioned study of a director whose films sweep viewers off their feet. She brilliantly relates filmic fantasy to the signature traits of Demy's style, and in doing so addresses the unsettling issues that make his cinema so pertinent and compelling.

– Tom Conley, author of An Errant Eye and Cartographic Cinema

Though Jacques Demy has always been considered different from most members of the French New Wave cinema, nobody until Anne Duggan's superb study, Queer Enchantments: Gender, Sexuality, and Class in the Fairy-Tale Cinema of Jacques Demy, has been able to explain exactly what that difference is. By focusing on the significance of the fairy tale for Demy's aesthetics and also his homosexuality for his subversive view of stereotypical thinking, Duggan demonstrates that Demy developed a profound queer sensitivity that enabled him to produce extraordinary films that questioned the hetero-normality of filmmaking and standard thinking about fairy tales. In short, Duggan's book not only sheds new light on Demy but also makes a major contribution to both queer and film studies.