Home » Books » The Queen Next Door 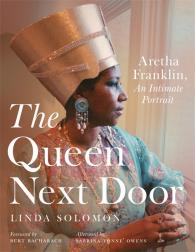 Save 30% when you use coupon code QND1 at checkout!

"Aretha was private. I respected this and she trusted me." Linda Solomon met Aretha Franklin in 1983 when she was just beginning her career as a photojournalist and newspaper columnist. Franklin’s brother and business manager arranged for Solomon to capture the singer’s major career events—just as she was coming back home to Detroit from California—while Franklin requested that Solomon document everything else. Everything. And she did just that. What developed over these years of photographing birthday and Christmas parties in her home, annual celebrity galas, private backstage moments during national awards ceremonies, photo shoots with the iconic pink Cadillac, and more was a friendship between two women who grew to enjoy and respect one another.

The Queen Next Door: Aretha Franklin, An Intimate Portrait is a book full of firsts as Solomon was invited not only to capture historical events in Aretha’s music career showcasing Detroit but to join in with the Franklin family’s most intimate and cherished moments in her beloved hometown. From performance rehearsals with James Brown to off-camera shenanigans while filming a music video with the Rolling Stones, from her first television special to her first time performing with the Detroit Symphony Orchestra, to her last performance with her sisters at her father’s church and her son’s college graduation celebration. In the book’s afterword, Sabrina Vonne' Owens, Franklin’s niece, honors her aunt, a woman who was an overwhelming supporter of civil rights, women’s rights, and fundraising campaigns that helped to benefit her hometown. There was a time in her career—when Franklin was more in demand than ever before—when she insisted that if someone wanted her to perform, they had to come to Detroit. During this time all of her major concerts, national television specials, music videos, and commercials would happen in Detroit. Aretha Franklin showed her respect for the people in the city who championed her from the very beginning when she started singing as a young girl in the church choir.

Franklin used to say, "I am the lady next door when I am not on stage." The Queen Next Door offers fans a personal and unseen look at an extraordinary woman in her most natural moments—both regal and intimate—and highlights her devotion to her family and her hometown Detroit—"forever and ever."

Linda Solomon is an award-winning photojournalist and author. She is known for her natural light portraits of
celebrities and her nonprofit foundation, Pictures of Hope, which provides cameras to children living in shelters in
the United States. Linda is a member of the prestigious Michigan Journalism Hall of Fame and the author of The
Key: Celebrated People Unlock Their Secrets to Life.

Aretha and I grew up together. She was the sister I never had. Her parents were parents of both of us. She is more than a Queen of Soul. She’s a Queen of Caring, a Queen of Social Justice. She stood with Dr. King and she stood for Nelson Mandela. This beautiful book captures her essence.

Linda’s got ‘it’"—what a great artist!

To most, Aretha Franklin is an icon. But to Linda, she was also a friend. And Linda’s intimate photographs of Aretha reveal the true lady beyond the legend. What a gift for all her fans!

A picture is worth a thousand words, and with Linda no words were needed with she and Aretha. A powerful, emotional journey of photos that are beyond words and inspires us all to ‘say a little prayer.’ Thank you, Linda Solomon!

Linda Solomon is a Michigan treasure. She photographs celebrities and friends with equal enthusiasm, all the while devoting much of her time teaching others to enjoy the profession she loves.

– James J. Blanchard, former Governor for the State of Michigan

I feel like I’ve known Linda all my life. She intuitively seems to know how to catch that déjà vu moment with her camera lens—giving the pictures a unique and special touch like no other. She amazes me.

Her voice, her presence lives and breathes in her music which is kicking it to this day in my world. And now add some beautiful visuals. Thanks Linda for the wonderful images of the Queen of Soul.

Aretha Franklin trusted very few journalists—a handful of us were lucky enough to be in that number, and that includes Detroit-based photojournalist Linda Solomon. You can see in the Queen of Soul’s soft, unguarded expressions in Linda’s photographs in The Queen Next Door that she was at ease with her. Linda had unprecedented access, but she didn’t overwhelm Aretha with a barrage of shots, instead capturing sensitive, evocative photos of a woman with the mystique of an icon, who was also the down-home woman ‘next door.’ This trove of beautiful images is a must for fans of the Queen.

– Susan Whitall, editor of Joni on Joni: Interviews and Encounters with Joni Mitchell and author of Fever: Little Willie John’s A Fast Life, Mysterious Death and the Birth of Soul

In The Queen Next Door, Linda Solomon gives us a rare photojournalistic glimpse into the life, lady, and legacy of one of the greatest talents of all time, Aretha Franklin—the Queen of Soul. Like Motown, Aretha Franklin is synonymous with the city of Detroit; she represented Detroit royalty and realness at the same time. While Aretha never signed to Motown Records, she was undoubtedly part of the Motown family and, like my grandmother, Esther Gordy Edwards, founder of the Motown Museum, Aretha used her celebrity to elevate the city she loved, Detroit.

I met Linda Solomon in the early eighties while enjoying one of the Queen’s lavish parties. Linda was very charming and so professional in capturing that perfect and special moment. Linda will be always be special to all of us in the Queen’s court.

No one but Linda Solomon could have captured in moving words and photographs the real Queen, the Aretha Franklin who was sister-mama-daughter-friend, the woman who was larger-than-life star in her career, but down-to-earth Detroiter at home. Linda has given those who loved Ms. Franklin an intimate and needed tour of life off the stage.

[. . .] the 140 photographs collected in the volume reveal the Aretha Franklin who lived outside the spotlight, sure to intrigue music lovers and pop culture enthusiasts alike.

A unique and inherently fascinating visual tribute to one of America's greatest vocal talents of her day, "The Queen Next Door: Aretha Franklin, An Intimate Portrait" is an extraordinary, coffee-table sized volume that should be considered a 'must' for the legions of Aretha Franklin fans, and would prove to be an immediate and enduringly popular addition to personal, community and academic library collections.

Like any great artist, Franklin contained multitudes and her music conveyed more than one emotion. So did her life. The sense of pure joy that came through her voice also tied in with how much fun she always liked to have, especially around family and friends. It is this playful, and charitable, side of Franklin that comes through Linda Solomon’s photographs that comprise The Queen Next Door: Aretha Franklin, An Intimate Portrait.

As a 29-year-old journalist and photographer, Linda Solomon was in the right place at the right time. A visit to document a speaking engagement with Aretha Franklin for the Detroit Metro Times enabled her to gain the life-long trust of the shutter shy star. The result is a sparkling photographic journey of Aretha Franklin in some of her private moments. This book is a must for Franklin’s loyal fans, but it will also win over those with affections for lavish costuming.

Linda Solomon’s extraordinary book of intimate Aretha Franklin photographs is the holiday gift of the year. [On top of having an] extraordinary voice, [Franklin] was also quite brilliant, introspective, and philosophical. She was also a lot of fun and Solomon has really captured that. Beautiful work!

Solomon’s collection remains significant to Michigan—particularly Detroit—history. Through her photographs, Solomon makes clear that Franklin was more than the singer Detroiters loved, but also a philanthropist for her city and its people, an activist for women, an advocate for higher education, as well as a loving mother, sister, aunt, and friend.

Interview on Tom Joyner/BlackAmericaWeb.com -- Inside Her Story with Jacque Reid (September 6, 2019)